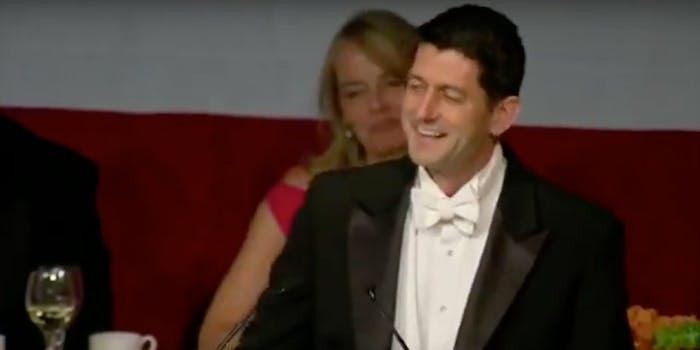 Speaking at the Alfred E. Smith Memorial Foundation dinner on Thursday, Ryan made several jokes about the president, whom he criticized during the 2016 election season but has repeatedly defended since Trump took office.

The dinner is typically attended by the Democrat and Republican presidential nominees during an election year and speakers tend to make jokes about opponents and themselves.

Ryan cracking jokes immediately. After receiving applause, Ryan quipped: “Enough with the applause, alright, you sound like the Cabinet when Donald Trump walks in the room.”

But he wasn’t done. Here are some other remarks from Ryan.

Ryan was not the only politician to give Trump a ribbing on Thursday. Former Presidents Barack Obama and George W. Bush also took jabs at their predecessor in separate speeches. Unlike Ryan, however, Obama and Bush’s comments were in earnest—and neither mentioned Trump by name.

Obama took to the stump for Virginia gubernatorial candidate Ralph Northam, thinly veiling his criticism of Trump in a speech to the crowd. “We’ve got folks who are deliberately trying to make folks angry, to demonize people who have different ideas, to get the base all riled up because it provides a short-term tactical advantage,” he said.

Bush similarly criticized the president in a speech at the George W. Bush Institute in New York on Thursday during which he condemned the rise of “emboldened” bigotry and nationalism under Trump. “Our politics seem more vulnerable to conspiracy theories and outright fabrication,” he said.