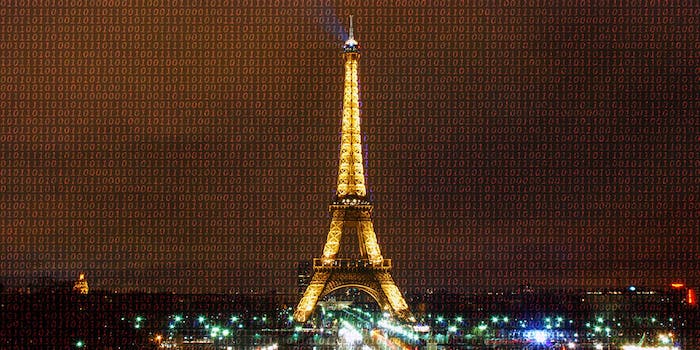 Surveillance defenders are seizing the tragedy to push for new spy powers.

Current and former intelligence officials are using Friday’s deadly terrorist attacks in Paris to call for sweeping new government surveillance powers, including the ability to bypass the encryption that protects electronic communications.

“I think this is going to open an entire new debate about security versus privacy,” Michael Morell, the former deputy director of the Central Intelligence Agency, said Sunday on CBS’s Face the Nation. “[W]e need to have a public debate about [encryption]. … We have, in a sense, had a public debate. That debate was defined by Edward Snowden … and the concern about privacy. I think we’re now going to have another debate about that. It’s going to be defined by what happened in Paris.”

“The dark space of the Internet is becoming a breeding ground for terrorist communications, recruitment, and plotting.”

CIA Director John Brennan also criticized the growing trend toward strong encryption in a speech Monday morning at the Center for Strategic and International Studies’ Global Security Forum. “I do hope this is going to be a wakeup call,” he said in reference to the debate over cryptography and electronic surveillance.

Some senior intelligence officials worry that the increasing use of encryption, built into operating systems like Apple‘s iOS 8 and messaging software like WhatsApp, is stymying law-enforcement and counterterrorism investigations. FBI Director James Comey, who calls the alleged problem “going dark,” has pressured tech companies to add “backdoors” to their encryption for law enforcement, resurrecting a decades-old fight known as the “crypto wars.”

“The dark space of the Internet is becoming a breeding ground for terrorist communications, recruitment, and plotting,” Rep. Michael McCaul (R-Texas), the chairman of the House Homeland Security Committee, told Politico in an email on Monday. “Our inability to monitor encrypted messages on social media apps, and the terrorists’ awareness of that, compounds the danger America and the West face.”

The Obama administration privately debated and later abandoned plans to call for backdoor mandates. In an email during those discussions, obtained by the Washington Post, Robert Litt, the general counsel for the Director of National Intelligence, wrote that widespread public opposition to backdoors “could turn in the event of a terrorist attack or criminal event where strong encryption can be shown to have hindered law enforcement.”

A National Security Council spokesman did not comment on the record when asked if the Paris attacks had changed President Obama’s attitude toward strong encryption. A senior administration official emphasized President Obama’s promise on Monday to expedite intelligence-sharing operations between U.S. and French authorities.

“We have told the French that the United States stands ready to assist however we can,” the official said in an email. “To further that cooperation, the President announced today that the Office of the Director of National Intelligence and Department of Defense have agreed that U.S. military personnel will more easily share operational planning information and intelligence with their French counterparts on a range of shared challenges.”

An FBI spokesman did not respond when asked whether Comey wanted new powers to bypass encryption.

Sen. Marco Rubio (R-Fla.), the only Republican presidential candidate who sits on the Senate Intelligence Committee, said Sunday on ABC’s This Week that the attacks highlighted the need to conduct mass phone surveillance.

“Let’s say that, God forbid, what happened in Paris happened in Washington,” Rubio said. “We would want access to these people’s phone records, because it would give us clues as to who they were working with, who probably may be involved in plots themselves later on down the road.”

Rubio was criticizing Sen. Rand Paul (R-Ky.), another Republican candidate, who has been a vocal opponent of the National Security Agency’s bulk telephone-records collection program.

As surveillance critics have pointed out, however, the NSA already conducts bulk records collection overseas without the limitations that apply to its domestic program, yet it still did not put the pieces together in time to help France prevent the attacks. Even France’s own new spy powers, which include the ability to surveil phone and email communications without a warrant, failed to alert it to the threat.

Surveillance reformers in the United States scored their biggest victory to date in early June with the passage of the USA Freedom Act, which transferred the NSA‘s bulk-records program to the phone companies and implemented a few other transparency and privacy reforms.