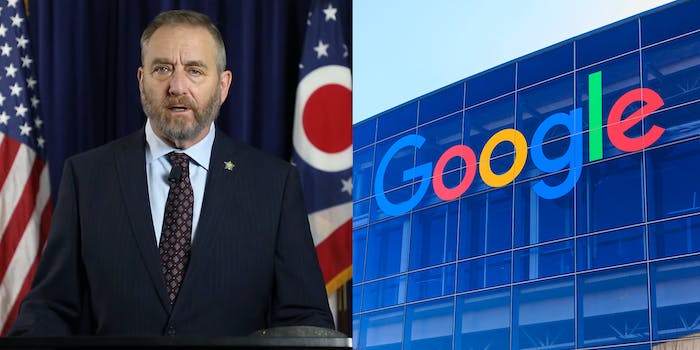 Republicans have long decried ‘utility’ regulations for broadband, but now want it for Google

Ohio’s attorney general on Tuesday filed a lawsuit seeking to treat Google as a public utility.

The lawsuit, filed by Republican Attorney General Dave Yoast, seeks to have a court declare Google a common carrier, or a utility, under Ohio common law that would subject it to government regulations.

Yoast’s lawsuit is somewhat ironic considering the stance most Republican lawmakers take amid the debate about net neutrality rules. But it also reflects how the party has selectively applied the idea of common carrier regulations to certain tech industries.

In 2015, when the Federal Communications Commission (FCC) enshrined net neutrality rules in the Open Internet Order, it classified broadband providers under Title II of the Communications Act and essentially treated them as common carriers.

Since then, net neutrality rules were repealed by a Republican-led FCC, who switched the classification for broadband carriers to Title I, an information service. That classification has less stringent regulation.

For years, Republicans have decried classifying broadband under Title II and imposing “utility-style” regulations to the industry.

But as the Ohio lawsuit shows, it appears that Republicans are eschewing that rejection of “utility-style” regulations when it comes to their latest target: big tech and edge providers like Google.

To be clear: net neutrality rules apply to internet service providers (ISPs), not edge providers like Google and Facebook (despite some attempts by Republicans to try and conflate the two as the net neutrality restoration debate heats up).

But it’s also not really all that new for Republicans to try and skirt the “utility” line when it comes to edge providers and ISPs. During congressional hearings in 2019, former Rep. Greg Walden (R-Ore.) brought up whether edge providers should be classified as common carriers while discussing “abuses” like “limiting conservative voices on social media.”

While other states have passed net neutrality laws in the wake of the FCC’s repeal, Ohio did not have any laws introduced in 2019 and 2020, according to the National Conference of State Legislatures.

In fact, Ohio’s former attorney general said he would not join other states that sued the FCC for its net neutrality 2017 repeal. Yoast, who was running for attorney general at the time, said he didn’t think it would appropriate for Ohio to get involved, according to the Columbus Dispatch.

So in 2017, Yoast said Ohio shouldn’t sue to try and overturn the FCC’s decision to declassify broadband as common carriers. Just a few years later, he’s suing to try and get Google to become a common carrier.