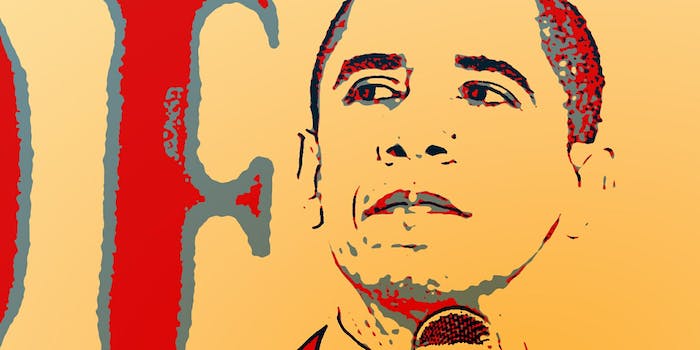 The Internet has taken the spotlight in President Barack Obama’s strategy to defeat the Islamic State.

In an Oval Office address to the U.S. on Sunday night, Obama said he would “urge high-tech and law enforcement leaders to make it harder to use technology to escape from justice.”

Close observers will tell you that this statement serves as a almost imperceptible nod toward the global fight over encryption that’s increasingly associated with terrorism and ISIS.

Encryption scrambles data and information to make it unreadable to anyone but the intended recipient. It is used by virtually all Internet users through websites’ “HTTPS” connections, and it is enabled by default on locked Apple mobile devices using iOS 8 or newer and many Android devices, to name only a few applications of encryption.

Despite the president’s thinly veiled rhetoric, encryption technology did not play a significant role in either the Nov. 13 Paris attacks nor Wednesday’s San Bernardino attacks. Even so, encryption came under widespread criticism in the wake of both attacks.

“The blood of a lot of these French young people is on [Edward Snowden’s] hands,” Former Central Intelligence Agency Chief James Woolsey said of the former NSA contractor-turned-whistleblower following the Paris attacks, “because of what he turned loose.”

Woolsey is not alone in suggesting that Snowden’s actions drove terrorists to use encryption and escape Western intelligence agencies in order to carry out their attacks. However, Woolsey’s claim has no known basis in fact.

The terrorists who killed over 130 people in Paris launched their attack using standard, unencrypted text messages, according to French authorities. There is also “no evidence [the San Bernardino] killers were directed by” anyone overseas, Obama said on Sunday night, whether through encrypted communication or otherwise.

In the last two years, the debate over encryption has intensified in the United States and around the world due in part to Snowden’s leaked documents, some of which showed the National Security Agency’s ability to monitor wide swaths of online activity.

Obama’s non-specific statement on the use of technology to “escape from justice” makes it impossible to glean any specific policy recommendations. In October, the Obama administration rejected a proposal that would have allowed law enforcement to weaken commercially available encryption technology. His decision to suggest that technology companies and law enforcement work together, however, echoes that of proponents of weakened encryption.

More specific language will likely be used at a Wednesday briefing, where the House Judiciary Committee will question Federal Bureau of Investigation leadership on key encryption questions. FBI Director James Comey and his subordinates have regularly urged consideration of legally mandated “backdoors” in encryption technology that would allow law enforcement and intelligence agents to access encrypted communications.

Intelligence sharing and cooperation with Muslim nations and communities in countering the Islamic State’s potent online presence were two of key tactics noted by Obama.

Attempts by the U.S. government to counter ISIS online have proven relatively ineffective so far. A shift away from a U.S.-based counter-propaganda campaign would be a significant change in strategy considering the current program is “in disarray,” according to Will McCants, director of the Project on U.S. Relations with the Islamic World at the Brookings Institution and a former adviser to the State Department.

In the face of calls for drastic action against the Islamic State, Obama called ISIS a “cancer with no immediate cure.”

Photo via Jerry Richardson/Flickr (CC by 2.0) | Remix by Max Fleishman