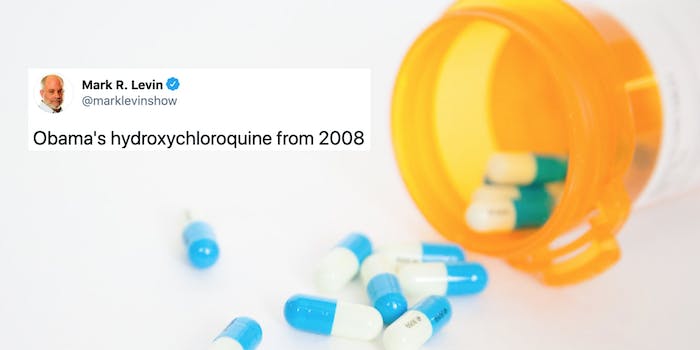 Right-wing personality Mark Levin tweeted out a picture on Friday of a prescription pill bottle he claims belonged to the 44th president. The tweet appears to insinuate that the drug, repeatedly touted by Trump as a cure for coronavirus, must work given its alleged use by Obama.

Despite countless studies showing that the anti-malaria drug is not effective and even potentially dangerous for COVID-19 patients, conservatives have bent over backward to defend the pharmaceutical merely because the president has expressed support (and also taken it).

But as many on Twitter quickly pointed out, the pill bottle is anything but a slam dunk for Trump fans. For starters, the drug in question is not even hydroxychloroquine but atovaquone-proguanil, also known as Malarone.

Secondly, the alleged perception is from July 2008, more than a decade before coronavirus first appeared. And if the pill bottle is to be believed, Obama was taking the prescription around the same time he was visiting Afghanistan, a country that is still dealing with malaria.

Even if the prescription had been hydroxychloroquine, the drug is intended for malaria. Obama’s alleged use wouldn’t bolster the argument that it’s a legitimate treatment for the coronavirus.

Levin’s tweet has since been shared nearly 20,000 times and widely mocked.

“Wow. So hydroxychloroquine has been *not treating coronavirus* for decades,” @HoarseWisperer wrote. “Blockbuster, dude. Clear shelf space for your Pulitzer.”

Even some supporters of Levin couldn’t justify defending the tweet.

“Mark, I’m a fan of yours and also a pharmacist,” @cfirenze4 said. “This is a different antimalarial and standard for overseas travel to Africa and some parts of Asia. Nothing to see here.”

In reality, the tweet is unsurprising given Levin’s history of bad takes.

As reported by the Daily Dot last month, Levin fell for a fake tweet purporting to show Rep. Alexandria Ocasio-Cortez (D-N.Y.) calling for businesses to be shut down in order to harm Trump’s reelection chances.

Levin responded to the Daily Dot’s reporting by claiming that he hadn’t actually been duped by the fake tweet due to the fact that he only fell for the fake tweet for a short period of time.