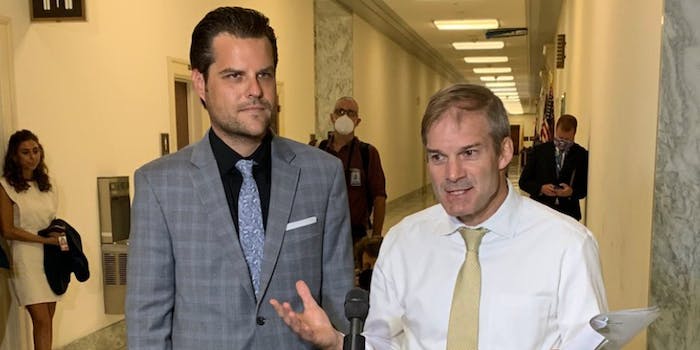 ‘Beavis and Butt-Head’: People are memeing this photo of Jim Jordan and Matt Gaetz

Gaetz eventually responded to the mockery after becoming a top trend on Twitter.

Rep. Matt Gaetz (R-Fla.) and Rep. Jim Jordan (R-Oh.) became a meme on Thursday after the duo were pictured together in the nation’s capitol.

The picture, which showed the two politicians speaking to the press, immediately raised eyebrows given Gaetz’s choice of attire in contrast to Jordan.

“Legitimately curious about whether Jim Jordan is paying Matt Gaetz to dress this way in order to make himself look stylish by comparison,” @MattGertz joked.

The image quickly took off, leading many to draw comparisons between the odd couple and the cartoon characters Beavis and Butt-Head.

But that was only the beginning. Countless Twitter users began noticing similarities between the pair and numerous other fictional characters.

The congressmen were compared to everyone, from actors Ray Liotta and Joe Pesci to characters from the iconic comic book franchise Dick Tracy.

Much of the attention though was given to Gaetz’s suit, which Twitter users argued was “ugly” and poorly fitted.

Gaetz eventually responded to the original tweet, joking that he had been given money by Jordan to buy suits of his own.

The term “Gaetz” eventually began trending on Twitter as a result of the congressman’s wardrobe.

Unlike Gaetz, Jordan thus far has not responded to the photo’s meme-status. It remains unclear whether Gaetz will wear the suit again after today.