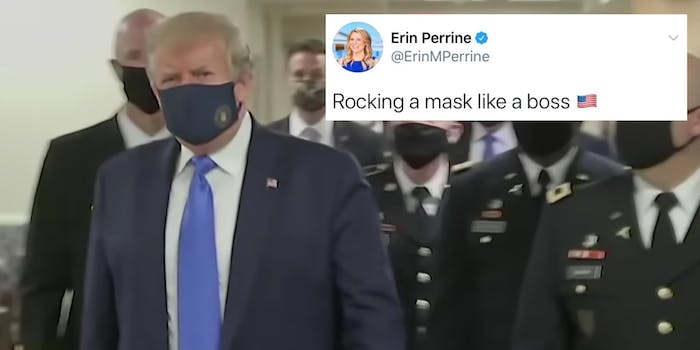 Conservatives suddenly think masks are cool after Trump wears one

'Going to go out on a limb here and say President Trump looks pretty badass in a mask.'

Initial praise for the president came from members of his staff. Erin Perrine, Trump’s director of press communications, applauded the president for “rocking a mask like a boss.”

A strategic advisor for Trump’s campaign, Boris Epshteyn, even suggested that the president finally wearing a mask would lead him to victory in 2020.

But it wasn’t just the president’s staff defending him. Conservative pundits also lavished praise on the commander-in-chief.

Conservatives argued that masks had been cool all along, but that it was actually Biden’s fault that they didn’t originally look cool.

Biden’s campaign responded to Trump’s face covering by pointing out just how long it took the president to finally adhere to proper health guidelines.

“Donald Trump spent months ignoring the advice of medical experts and politicizing wearing a mask, one of the most important things we can do to prevent the spread of the virus,” campaign spokesman Andrew Bates told ABC News. “Rather than taking responsibility and leading, he wasted four months that Americans have been making sacrifices by stoking divisions and actively discouraging people from taking a very basic step to protect each other.”