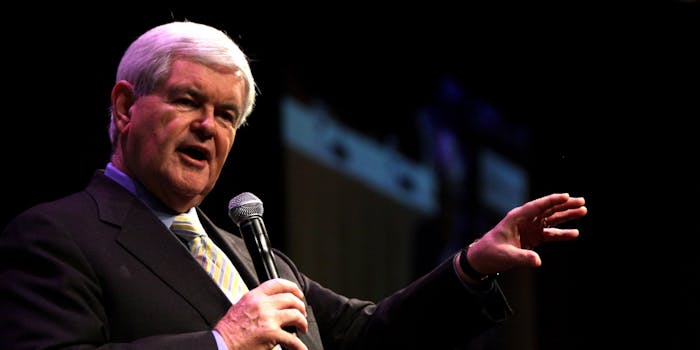 Newt Gingrich is now promoting Julian Assange, whom he once called a ‘terrorist’

Having once described Julian Assange as a “terrorist” and “absolute enemy” of the United States, Newt Gingrich is now actively promoting Assange’s website, WikiLeaks, in the press and on Facebook, proving that politics does indeed make strange bedfellows.

Gingrich, a former speaker of the House who was shortlisted as a potential running mate for Republican nominee Donald Trump earlier this year, told Fox News that Republicans who had rescinded their endorsements of Trump had “a lot of egg on their face” following his debate performance Sunday night.

WikiLeaks on Friday released more than 2,000 alleged Clinton campaign emails and promised more in the coming weeks—including 2,086 released in a second drop on Monday. The leaks show Clinton acknowledging her family’s privilege and wealth, even telling a Goldman Sachs executive that there’s a “bias against people who have led successful and/or complicated lives.” Clinton also reportedly acknowledged in 2013 that on certain issues she takes a “public and private position.”

The emails of Clinton campaign chairman John Podesta show the campaign was concerned that disclosing transcripts from Clinton’s paid speeches to Goldman Sachs would make her appear too friendly with the banks. The New York Times editorial board called on Clinton to release the transcripts in February, proclaiming, “Voters have every right to know what Mrs. Clinton told these groups.”

Approached by an Intercept reporter in January about the transcripts, Clinton laughed before turning away from the reporter. According to the Times, Clinton and her husband have made at least $125 million on the speaking circuit since 2001. Clinton raked in $675,000 alone from three speeches at Goldman Sachs.

“Information warfare is warfare. Julian Assange is engaged in warfare.”

“I would hope a lot of those who panicked over the weekend would consider their position over what we’ve learned about Hillary through WikiLeaks and the importance of stopping her from truly crippling the country,” Gingrich said following Sunday’s presidential debate, referring to the conservative exodus caused by a video leaked Friday in which Trump boasts about how his fame permits him to get away with sexually assaulting women.

As of Sunday, more than three dozen GOP leaders had denounced Trump or rescinded endorsements of his campaign citing the footage.

“The WikiLeaks guy should be in jail for the rest of his life,” Gingrich said during an appearance on Greta Van Susteren’s show. “He is an enemy of the United States, actively endangering people, and he’s gonna get a lot of folks killed. And I think that’s a despicable act, and we should treat him as an enemy combatant, and as an absolute enemy of the United States.”

Gingrich also previously defended Clinton from WikiLeaks—Assange had called on Clinton to resign over diplomatic cables containing collected intelligence on foreign officials—saying he was “proud” of then-Secretary of State Clinton because she “actually cared about national security.” Clinton “ought to be praised for trying to gather intelligence, not in any way attacked or condemned,” Gingrich said.

Gingrich added that no one affiliated with WikiLeaks should “feel comfortable for the rest of their lives,” telling Fox News viewers that Assange was “gonna get Americans and our allies killed.” Wikileaks, Gingrich said at the time, had effectively committed “an act of war against the United States.”

In a Facebook live broadcast on Monday afternoon, Gingrich slammed the media for “cheerfully” ignoring the revelations offered up by Assange, his one-time nemesis. “We have this secret Hillary. I hope the Trump campaign will spend at least a week exposing the secret Hillary. What did she say in these secret meetings? What is coming out in all of these various leaks?”