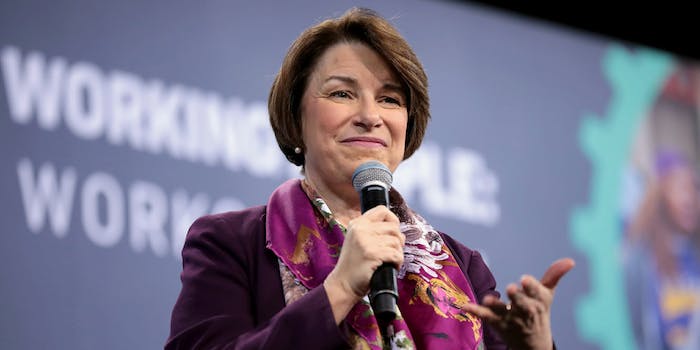 The senator continues to bring up net neutrality on the campaign trail.

Sen. Amy Klobuchar (D-Minn.) listed net neutrality among the dozens of actions she would take within her first 100 days as president if elected in 2020.

Klobuchar, who is among a large field of Democrats vying for the chance to take on President Donald Trump in the next presidential election, has been among the more vocal supporters of net neutrality during her time on the campaign trail.

When she announced her candidacy in February, Klobuchar cited it in her kick-off speech, promising a net neutrality “guarantee” for Americans.

On Tuesday, Klobuchar’s campaign released more than 100 actions the Minnesota senator would take within her first 100 days as president.

In it, she said she would “promote net neutrality” by using “federal contracting requirements to encourage broadband providers to honor net neutrality principle and promote a free and open internet.”

The approach appears to be similar to those being taken by a number of states who have passed net neutrality laws in the wake of the Federal Communications Commission’s (FCC) repeal in 2017. The bills typically require internet service providers with government contracts to adhere to net neutrality rules.

The plan does not mention supporting a bill like the Save the Internet Act, a bill that would undo the FCC repeal and restore the 2015 Open Internet Order. However, the senator has been vocal in her support of the bill and is one of its cosponsors.

The Daily Dot has reached out to Klobuchar’s campaign for comment. We’ll update this story if we hear back.

Klobuchar was also one of a handful of senators who pushed Supreme Court Justice Brett Kavanaugh on his views on the issue during his confirmation hearings last year.

In the plan, Klobuchar also mentions other internet issues she hopes to tackle. The senator promises to connect “every household to the internet by 2022” and to enact an executive order that would launch “government-wide cybersecurity initiatives,” including election security.