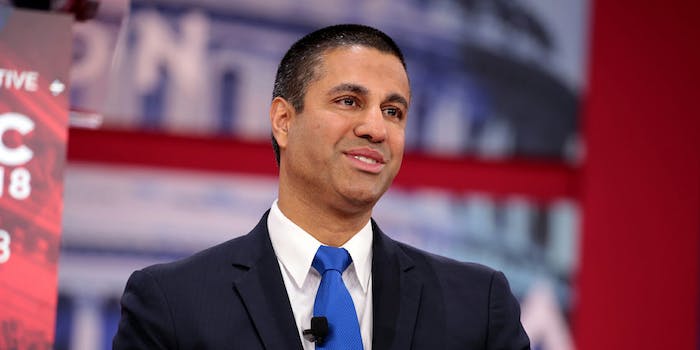 He sent the threats shortly after the FCC's repeal of net neutrality.

A man who sent death threats to Federal Communications Commission (FCC) Chairman Ajit Pai around the time of the agency’s repeal of net neutrality was sentenced to one-and-a-half years in prison on Friday, according to authorities.

The Justice Department announced the sentencing of Markara Man, 33 of California, on Friday. Authorities said Man sent three threatening emails to Pai in mid-December 2017, shortly after the FCC’s decision to repeal the 2015 Open Internet Order.

The emails sent to Pai, according to the Justice Department, included one where Man accused Pai of being responsible for a child who committed suicide because of the repeal; another where he listed locations near Arlington, Virginia, and threatened to kill Pai’s family; and a third that had an attached picture of Pai and a photo of his family in the foreground and out of focus.

Authorities said the emails were traced to Man’s home, where he admitted to sending them.

Man was arrested in June 2018. At the time, authorities said he wanted to “scare” Pai with the emails.

He faced up to 10 years in prison but will serve 20 months.

“Threatening to actually kill a federal official’s family because of a disagreement over policy is not only inexcusable, it is criminal,” G. Zachary Terwilliger, a U.S. Attorney for the Eastern District of Virginia, said in a statement.