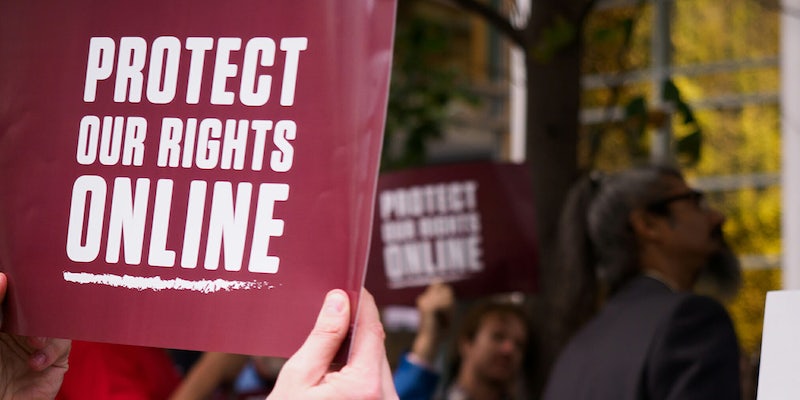 As the net neutrality CRA deadline in Congress approaches, support continues to grow

More than 1.3 million people have called lawmakers to vote for the net neutrality CRA.

When the Federal Communications Commission (FCC) voted last year to dismantle net neutrality rules, internet activists and lawmakers teamed up to tell millions of frustrated supporters that the fight was not over.

As the wave of immense public pushback against the FCC’s decision continued to grow, lawmakers and activists decided to wield a congressional tool to try and save net neutrality–the Congressional Review Act (CRA).

The act allows Congress to overrule federal regulations issued by government agencies within a 60-day window, which internet activists say gives them time to try and rally the web once more to show their lawmakers that net neutrality, which ensures all internet traffic is treated equally, isn’t a niche topic. Instead, they hope to show it is something millions of people want to see saved.

“The backlash to the repeal was overwhelming from internet users across the political spectrum. It led to a situation where we’re actually on the offense and we have this incredible tool, a powerful tool, somewhat of a blunt instrument, that Congress can use to block the FCC’s incredibly unpopular decision and keep these rules in place,” Evan Greer, deputy director of internet advocacy group Fight for the Future, told the Daily Dot in a recent interview. “It’s kind of the perfect mission for the internet.”

Greer continued: “I think this is a pivotal moment. This is really the moment to rally the internet to fight.”

In late February, the efforts to use the CRA to save net neutrality kicked off. Democrats in Congress gathered in Washington D.C. with net neutrality proponents and announced that they would use the legislative tool to try and overturn the FCC’s decision. The CRA requires a simple majority in the Senate and the House of Representatives to pass, and ultimately would need to be signed into law by President Donald Trump.

The 60 legislative day window for a so-called discharge petition to be filed for the Senate version of the CRA closes on June 20. As of Tuesday, 50 Senators have expressed support for the CRA–just one Republican vote shy of the majority needed in the event of a vote. The House has 161 lawmakers in support of it, making it 57 votes shy of passing with more than 30 Democrats not yet expressing their support. If the Senate’s version passes, the House has until its the end of this Congress to pass theirs.

The CRA has been used before, by Republicans early last year to rollback several Obama-era rules issued at the end of his presidency, according to the Washington Times.

Sen. Edward Markey (D-Mass.), who has spearheaded the Senate’s net neutrality CRA, told the Daily Dot in that a free and open internet is a right, not a privilege.

“Since the FCC’s decision to repeal net neutrality, we have witnessed an historic movement emerge to protect that right and it continues to build,” Markey said. “With only one more vote needed for my CRA resolution to undo the Trump administration’s political decision on net neutrality, Republicans have a choice–stand with the overwhelming number of Americans who support net neutrality or side with the corporate interests who only care about their bottom line.”

Markey is expected to file a discharge petition–which already has the needed 30 votes needed to bring the CRA to a vote on the Senate floor–before the June 20 deadline. It’s unclear whether the vote will happen immediately or several weeks after that. After that, a simple majority (51 votes) will be needed to pass the CRA.

Similarly, Rep. Mike Doyle (D-Penn.), who is a co-sponsor of the House CRA, lauded the efforts of internet activists pushing the issue.

“Americans overwhelmingly support net neutrality. If there’s enough grassroots activism on net neutrality, we have a real shot at getting this thing out of the House,” he said in a statement to the Daily Dot.

A big push as the net neutrality CRA vote nears

The “choice” for lawmakers that Markey spoke of is being highlighted online for voters to see. Internet activists are trying to help drum up support online by making it clear how every lawmaker is intending to vote on the net neutrality CRA.

Fight for the Future, Demand Progress, and Free Press Action Fund, a trio of internet rights advocacy groups, created an online scoreboard that shows which lawmakers have voiced their support for the CRA. The scoreboard also lets people select their state so they can see if their local lawmakers have supported the CRA or not.

As of Tuesday, the scoreboard says nearly 1.3 million calls have been made to lawmakers about the net neutrality CRA, with a handful of lawmakers—such as House Speaker Paul Ryan—getting more than 20,000 calls.

“We get emails all the time from people who get confused saying ‘oh I think my congressperson is actually on the right side of this’ when… their auto-responder about net neutrality could have been written by AT&T,” Greer said. “So the scoreboard is an awesome way to make sure they can’t get away from that. People know it’s a trusted source where they can go and find out where does my member of Congress really stand on this?”

Mark Stanley, the director of communication at Demand Progress, told the Daily Dot they intend to target “key lawmakers” (moderate Republicans in the Senate and House and Democrats who have yet to publicly support the CRA) in the coming weeks. Stanley also pointed to a recent poll that showed strong support for net neutrality across the political spectrum.

“I think as we approach the vote in the Senate, the public will become more and more engaged and more and more focused on this issue,” Stanley said. “A recent poll from the University of Maryland, for example, showed that 86 percent of all voters opposed the repeal of net neutrality, including 82 percent of Republicans. So this is an issue that has support among all voters.”

But the scoreboard isn’t the only plans activists have for attracting attention to the CRA.

Greer said activist groups are planning “another huge internet-wide online push” before the CRA vote in the Senate that could be similar to the Internet-Wide Day Of Action To Save Net Neutrality, where major tech companies, websites, and organizations rallied together to push for awareness about the FCC’s vote. That day led to more than 2 million people to submit comments to the FCC, nearly triple the number of comments left during the 2014 “Internet Slowdown.”

Besides internet-wide action, Greer said activists are putting together an open-letter from small businesses that support net neutrality that they plan to deliver to congressional offices on May 2, in the middle of “Small Business Week.”

As of Tuesday afternoon, more than 6,000 businesses had signed the letter, and the goal is to get 10,000 signatures. So far, the list includes veterinary offices, restaurants, medical startups, music venues, attorneys, chiropractors, engineering firms, and other businesses, according to Fight for the Future. The letter says small businesses will “accept nothing less” than the net neutrality rules that were enacted in 2015.

The advocacy groups are also planning protests at congressional offices as the CRA vote gets closer because they feel that the CRA vote could be one of the most consequential votes, in terms of tech policy, that Congress has tackled in years.

“It’s a really unique moment. We need only a simple majority to pass a bill that would basically reinstate overwhelmingly popular net neutrality rules,” Stanley, of Demand Progress, said. “The public is really in support of net neutrality. They engage on this, and they mobilize on this issue … in a really big way.  I think what is going to happen is as we get closer to the Senate vote … it’s really going to focus the attention of the public, and the attention of lawmakers on this issue.”

“We’re going to need another moment like we had before the FCC vote where the internet comes together to fight,” Greer said. “That’s going to mean major web platforms will need to harness their reach, we’ll do phone calls and emails to Congress again, and it means ordinary internet users are going to have to do that too … This is very much a moment for everyone to get involved and exercise their power. In whatever small corner of the internet you control, this is the moment to put it on red alert and get everyone engaged.”