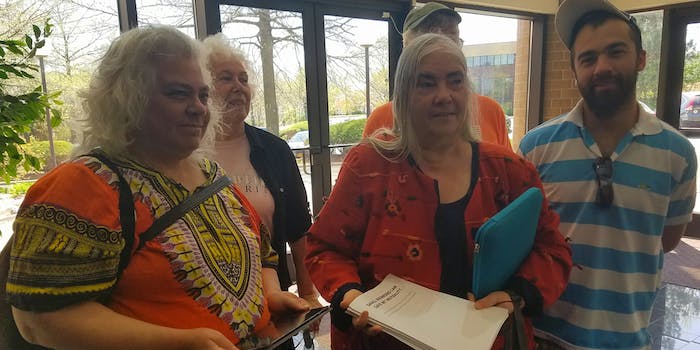 Nearly 6,000 businesses signed the letter that was delivered to lawmakers across the country.

Net neutrality activists hand-delivered an open letter from small business owners to members of Congress across the country on Wednesday, urging them to support an effort to undo the Federal Communications Commission (FCC) decision to rescind the 2015 Open Internet Order.

The letter, which was signed by nearly 6,000 small businesses, was designed to be delivered in the middle of Small Business Week and tells lawmakers they will “accept nothing less than the protections embodied” in the Open Internet Order, which ensured all internet traffic be treated equally. Without the rules, advocates say, internet service providers could “speed up” or “slow down” internet traffic.

The letter also asks lawmakers to support an ongoing effort to use the Congressional Review Act (CRA) to overturn the FCC’s decision.

Sen. Edward Markey (D-Mass.) announced earlier this week that the first step in the CRA process—a discharge petition—will be filed next week, forcing a full Senate vote. A simple majority is needed to pass, and currently the effort is one Republican vote short of the needed votes to secure a majority. After those efforts, a House version of the CRA would also need to pass.

“The goal is to show members of Congress how many small businesses owners support net neutrality,” Josh Tabish, a technology exchange fellow at Fight for the Future, an internet rights advocacy group, told the Daily Dot. “Any lawmaker who claims to care about the country’s small business sector needs to see this groundswell of support and immediately pledge to vote for the CRA.”

The letter was delivered to more than 40 congressional offices across the country on Wednesday, including to lawmakers that net neutrality activists think could become the needed 51st vote on the CRA such as Sen. Lisa Murkowsi (R-AK), Sen. John Kennedy (R-LA), Sen. Jeff Flake (R-Ariz.), and Sen. Rob Portman (R- OH), among others, according to organizers.

In New Jersey, a group of net neutrality supporters gathered outside of the office of Rep. Josh Gottheimer (D-N.J.), who has yet to publicly voice his support for the House version of the CRA.

The group delivered the letter to his office, with the list of small businesses organized to show more than 100 signatures from New Jersey.

“I’m a small business owner,” Kimi Wei said outside Gottheimer’s office. “I really fear net neutrality will be completely trashed and this will shut down small businesses. It could put me out of business… It’s scary.”

Gottheimer’s staff met with the group after they delivered the letter.

“We specifically asked for him to support the CRA in the House,” Sally Gellert said outside the congressman’s office. “We talked about the businesses and why they need net neutrality. It was encouraging… to be able to sit down and talk for 20 or 30 minutes.”

In a statement to the Daily Dot, Gottheimer did not address his position on the CRA, but praised a “free and open internet.”