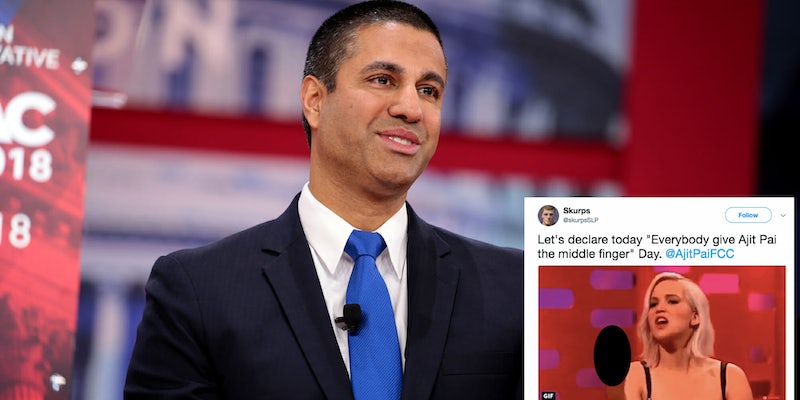 The FCC commissioner is getting a very special tribute.

Net neutrality is a founding principle of the internet, which states that all internet traffic should be treated equal. The 2015 Open Internet Order codified those regulations, but a Republican-led FCC did away with the rules back in December.

This afternoon, by a 52-47 margin, the Senate voted to rescind the FCC’s order.

While the CRA faces an uphill fight in the House, senators praised the action as the first major step forward for net neutrality.

On my way to the floor to cast my vote in favor of #NetNeutrality pic.twitter.com/wiCBDfc825

Breaking: the U.S. Senate just voted 52-47 vote on the bill to restore #NetNeutrality  and to protect a fair and open internet. Amazing victory for consumers, small businesses and rural communities. Final vote at 3. Watch on CSpan!

BREAKING: We just won the vote in the Senate on #NetNeutrality. Thanks to everyone for pushing so hard. We have more work to do but this is an excellent beginning.

Going down to floor to vote to protect #NetNeutrality. We are going to win this one folks. Now it’s time for pressure on the House!

The Senate just voted to restore #NetNeutrality. This wouldn't have been possible if the American people hadn't spoken up — now the House must pass this bill and stand with us to save the internet.

In a statement, Sen. Bill Nelson (D-Fl.) said today’s vote reflected the will of the American public.

“The American public understands how important these protections are to their lives and the future of the internet,” Nelson said. “They do not want to have their websites blocked or internet accessed slowed.  And, they certainly don’t want their internet providers making those decisions.”

Sen. Brian Schatz (D-Hawaii), in advance of the vote, tweeted that the Senate was hearing overwhelming feedback in favor of the CRA.

I just talked to a colleague who told me that phone calls were running 6,000 to 10 for #NetNeutrality. It is working.

A number of net neutrality activists organized a “Red Alert” protest in the lead-up to the vote, with major websites directing their users to contact their congresspeople.

“In the months since the FCC voted to repeal the net neutrality rules, the American people have raised their voices to tell their representatives in Congress to save those online protections, and have sent over 16 million emails and over 1 million calls to Congress,” Morris said. “As this measure heads to the House, it would be prudent for members to take note of this sustained outcry and vote to preserve net neutrality.”

Representatives already began lobbying for the effort in the House, which is currently lacking the necessary votes to pass.

The American people have made clear they want a free and open internet, without fast lanes and slow lanes.

It’s time for Congress to listen. The Senate just voted to save #NetNeutrality.

There is no excuse. @SpeakerRyan must schedule a vote. Now.

And, of course, people took a moment to pay tribute to the man whose efforts kicked off the fight, FCC Commissioner Ajit Pai.

Ajit Pai can put that Senate #NetNeutrality loss in his giant Reese's coffee cup and drink it. The next battle we need to win is in the House. Keep fighting for a free and open Internet. pic.twitter.com/uSRkMCHpS7

The House has until the end of their session in January to vote on the CRA. If passed, the CRA would still need to be signed by President Donald Trump.