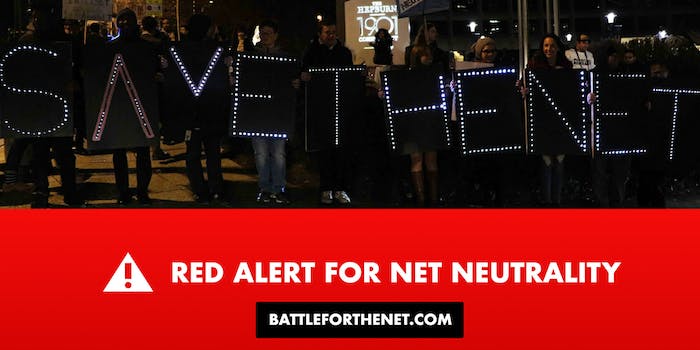 Several major websites and apps will go on “Red Alert” to save net neutrality tomorrow as lawmakers prepare to start a push in Congress to overturn the Federal Communication Commission‘s (FCC) decision to rescind the rules.

Internet activists are pushing the “Red Alert” protest, which will start tomorrow and run continuously until the Senate votes on the Congressional Review Act (CRA) that aims to save net neutrality—rules that ensured all internet traffic is treated equally.

The protest will put “Red Alerts” on pages across the internet that direct people to a plugin that will allow them to contact their local members of Congress to support the CRA, an effort which will start in earnest tomorrow, according to Sen. Edward Markey (D-Mass.), who will fill a discharge petition to force a vote.

The discharge petition, which only requires 30 senators to sign onto it and is expected to be filed on Wednesday, will force a full Senate vote on the net neutrality CRA.

The CRA then needs a simple majority to pass in the Senate and currently, 50 Senators have voiced their support for it meaning it is one Republican vote short of passing. If successful, a similar effort would take place in the House of Representatives. President Donald Trump would need to sign it into law if it passes through both houses of Congress.

It’s not yet clear when the Senate will vote on the CRA, but numerous websites, apps, and organizations have signed onto the protest, which means you’ll see large red banners all over the internet starting on Wednesday.

Websites and apps that have agreed to join in the protest include:

Organizers said several more “big” websites and apps are expected to join onto the effort on Wednesday.

“This is the moment for the entire Internet to go on Red Alert,” Evan Greer, the deputy director of Fight For The Future, one of the groups organizing the “Red Alert” protest, told the Daily Dot.  “We can’t sit back and hope that big companies will save us… Gamers, subreddit moderators, YouTube creators, meme queens, and Instagram stars, this is your moment to harness the power of the Internet to defend the power of the Internet, before its too late.”

Greer said overall 10,000 websites, people and organizations have signed onto the protest so far, and the groups are encouraging internet users to use “Red Alert” Facebook headers, Twitter headers, and avatars leading up until the Senate’s vote.