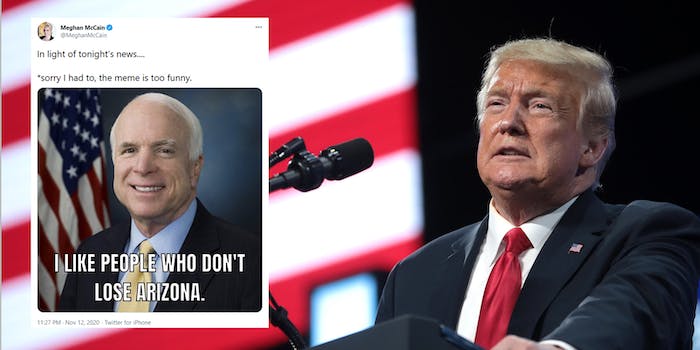 She posted a meme that called back Trump's infamous remarks about her father.

Arizona was called for President-elect Joe Biden on Thursday night, and Meghan McCain celebrated it by sharing a meme that mocks President Donald Trump’s infamous quote about her father, the late Sen. John McCain.

Trump infamously mocked McCain in 2015 when he said he “liked” soldiers who did not get captured. McCain was a prisoner of war during the Vietnam War. The remarks were just one of several moments where Trump spoke ill of the former senator.

But with Arizona helping cement projected Biden’s Electoral College victory, Meghan McCain, a co-host on The View, used the race call as a way to attention to Trump’s remarks.

In a tweet late Thursday night, McCain shared a meme that showed a picture of her father with the words: “I like people who don’t lose Arizona” written on it.

“In light of tonight’s news….*sorry I had to, the meme is too funny,” she tweeted.

During the 2015 primary, Trump said McCain was not a “war hero” because he was a prisoner of war and that he liked “people who weren’t captured.”

In September, after an Atlantic report cited sources who said Trump called McCain a “loser,” the president denied doing so in a number of tweets. However, like countless times before, there was a tweet contradicting what he said.

In the Atlantic report, the sources also described the disdain Trump had for military members, which resurfaced again on Twitter on Veteran’s Day.