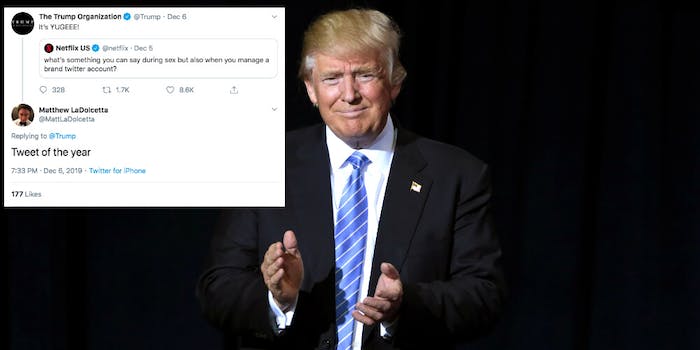 On Friday, brands do what brands do best by officially running a meme into the ground. Netflix tweeted, “What’s something you can say during sex but also when you manage a brand twitter account?”

Things got pretty wild. Arby’s asked, “Do you want more meat?” and Kettle Brand Chips wrote, “You can go elbow deep in me.”

Well, the Trump Organization also wanted in on the action.

“Tweet of the year,” wrote Matthew LaDolcetta, who is head of digital for the Trump Organization, according to his very own bio.

LaDolcetta was swiftly called out for the virtual self high-five.

“Great post, me,” Twitter user @LizardRumsfeld wrote, along with screenshots of LaDolcetta’s bio and response to his own response.