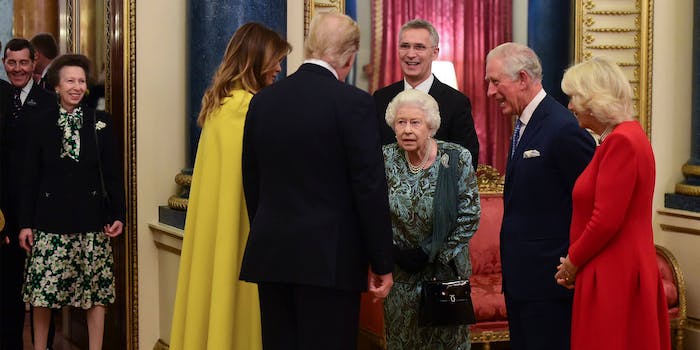 The Queen gave her that mom look but Anne just shrugged and laughed.

At a NATO reception in Buckingham Palace, Princess Anne, the Queen’s only daughter, was caught on camera refusing to come over and greet President Donald Trump and First Lady Melania Trump.

As the Queen gives her daughter a look common to all mothers, Anne just shrugs and starts laughing, apparently unafraid of the consequences for snubbing the president or, worse, crossing her mother.

Princess Anne is like “ I turned up mum, what more do you want from me ?!” 😅 love Princess Anne ! The shade is reaaaal 🤣

Queen: “Anne, get over here right this instant.”

Later on, the princess was also filmed with a cluster of NATO leaders, including British Prime Minister Boris Johnson, as they made fun of the president and his love of press conferences.

Nato leaders slagging off Trump while Princess Anne laps it up – not giving a single shit – is also the mood we need to take into today pic.twitter.com/OLxmFRzqk1

Shoutout to Princess Anne for flat out refusing to meet Trump haha pic.twitter.com/YMsbMZfRCe

If you had "Princess Anne giving Trump side eye" on your "2019 IS OUT OF CONTROL" Bingo Card, then please mark it off.

IS PRINCESS ANNE DEAD?
*checks trending*
OH LAWD. IT IS I WHO IS DED pic.twitter.com/KUkWEzaETG

Princess Anne has ALWAYS been an absolute hero in the royal family. Didn’t give her kids titles, first to divorce, working round the clock…

The videos of her gossiping with world leaders & shrugging like a teenager at the queen are just the cherry on top. *chef’s kiss* pic.twitter.com/3RLgQHOxMf

"Why is 'Princess Anne' trending?", I asked myself.
Reader, I was not disappointed.
Princess Anne has long been the "not putting up with your shit" member of the Royal Family.
Her reactions to The Orange Buffoon were bound to be shareworthy. #PrincessAnne

Always loved her. Grew up in the village where she lives. When you’ve seen her with a sledgehammer, slamming in wooden posts on the side of a main road, with no security detail, and a young Zara and Peter sat watching on, you knew she didn’t give a stuff.

'[After shooting her chauffeur and bodyguard, the kidnapper] directed Anne to get out of the car, to which she replied: "Not bloody likely!", and reportedly briefly considered hitting him.'

People are surprised that Princess Anne can hang? That woman once was the victim of an attempted kidnapping and when she was told to get out of her car at gunpoint she said, "Not bloody likely." A true bad bitch.

Fans are also desperate for this to turn up in The Crown.

I knew this happened.

But I’ve yet to see it up close.

Cannot wait for this to be The Crown Season 8. https://t.co/ZuHIxwy8ta

I think the greatest part of today is realizing Princess Anne is kind of exactly how she is portrayed in The Crown. pic.twitter.com/4p7USH0fgP

The whole thing seems to have catapulted Anne to the top of everyone’s favorite royals.

Princess Anne snubbing Donald Trump has made her officially our favourite member of the Royal Family. *Shrugs* pic.twitter.com/dMbq2c0Xw5

Omg. When I was growing up in Illinois, Princess Anne (the brunette with a high bun, wearing the flower print dress and blazer), was the naughty princess. God love her, she hasn’t changed. We stan her reaction to dtump and Mel. https://t.co/r8i8q01CPm

The Princess Anne ‘no, fuck you’ shrug could and should be used in all political situations from here on. Thank you ma’am.