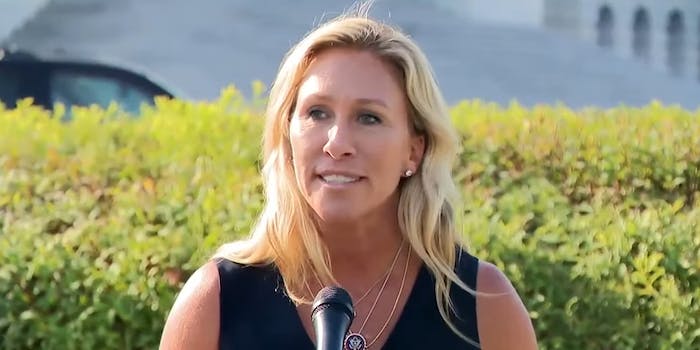 Almost no one is buying her apology, though.

Rep. Marjorie Taylor Greene (R-Ga.) is struggling to convince people of her sincerity as she attempts to walk back her comments on mask mandates and genocide after touring the Holocaust Museum.

Yesterday, Greene, a QAnon conspiracy theorist, arranged a secret trip to the Holocaust Museum. Afterwards she claimed that she now realizes how bad the genocide of the Jewish people really was.

Greene said that she’d spent “weeks” thinking about it, and she now understands that systematic murder of 6 million Jews doesn’t really compare to being required to wear a piece of fabric over your mouth and nose to minimize the risk of transmitting a deadly virus.

“The Holocaust is—there’s nothing comparable to it,” she said. “…The horrors of the Holocaust are something that some people don’t even believe happened.”

People are struggling to take her apology at face value.

“So she made it to public office having little to no knowledge of the most catastrophic world event of the last 80 years?” one person tweeted skeptically.

Some found it even more difficult to believe Greene because she noted that she visited Auschwitz concentration camp, where 1 million perished at the hands of the Nazis, as a teen.

Greene may have been hoping for redemption, but she found little forgiveness online.

David Weissman, who started a petition to expel Greene from Congress, tweeted, “I wanted to accept Marjorie Taylor Greene’s apology for her COVID restrictions, especially when people have forgiven me for my hateful past.

“But you guys are right, she’s not sincere and will continue to be the antisemitic troll who should be expelled from Congress.”

The petition has more than 200,000 signatures as of this writing.