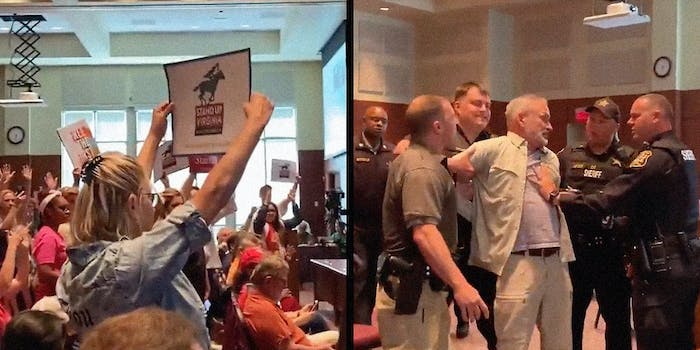 The right has made Loudoun County, Virginia the center of the debate over critical race theory

The wealthy Northern Virginia county has become the center of the culture war over critical race theory.

Loudoun County, Virginia became the center of the divisive debate over critical race theory after a school board meeting Tuesday night turned so raucous that police cleared the room. One man was arrested, another ticketed.

Now people are claiming that some who disrupted the meeting came from outside the community and that Loudoun County is the latest front of right-wing efforts to incite a culture war.

Tuesday’s school boarding meeting included an agenda item to discuss a state mandate to develop inclusive policies for transgender students. While some members of the public spoke for or against such policies, coverage from the meeting show that many present attended to oppose teaching critical race theory (CRT), which wasn’t on the agenda, nor is it part of the school curriculum.

CRT essentially amounts to factoring systemic racism into lessons about law and history. Right-wing figures have lately seized on the theory. While it’s primarily taught in higher education settings, in recent months, Republican-led states, including Florida and Texas, have passed laws aimed at banning it from public school curricula.

Groups in the wealthy Northern Virginian county have been agitating against CRT for months, the Loudoun Times-Mirror reports.

Tuesday night’s school board meeting was the latest in a saga that includes accusations of doxing, harassment, threats, and a petition to recall school board members seen as supporters of teaching the theory. Two local groups have strenuously opposed it: Parents Against CRT (PACT) and Fight for Schools.

Hundreds showed up at Tuesday’s school board meeting in Loudoun County, the final of the school year, to voice their opposition to CRT and, to a lesser extent, transgender-inclusive policies.

After being once warned to quiet down, the anti-CRT crowd erupted again when a former state senator spoke against the theory. The board then voted unanimously to end public comment.

Amid boos, jeers, and chants of “shame on you,” local police began clearing the room, according to the Times-Mirror.

Images of the scene show chaos and outrage. One person was reportedly injured. The incident has raised questions about how Loudoun County became the center of the debate over CRT, and why so many people felt compelled to attend the meeting to speak against it.

Locals believe they have an answer: the calls are coming from outside the community. Right-wing media and figures have eagerly trumpeted the conflict.

On Wednesday, several members of a Facebook group for parents with children in Loudoun County schools posted a screenshot of a letter from the Fairfax Republicans urging members to attend last night’s meeting.

Fairfax Republicans’ chairman did not respond to an email Wednesday afternoon.

“Our neighbors in Loudoun County need us to join their rally and speak out on behalf of their kids!” the letter states. It also claims that Fairfax Democrats were planning to bus people to the meeting.

“I remember seeing that and I was very confused because I didn’t organize any buses out to Loudoun County,” Kiraly told the Daily Dot. “I know the Loudoun County Democratic Committee organized buses.”

He said they did retweet the neighboring county’s offer of rides to the meeting, but didn’t send anyone from Fairfax County.

Local reporter John Battiston, who covers education for the Times-Mirror, told the Daily Dot via email that local Democrats hosted a “Loudoun for all” rally before the meeting, and wore clothing and carried flags indicating support for LGBTQ inclusive policies.

But while footage shows the other side carrying mass-produced signs opposing CRT, many of which included a website for Fairfax-based Stand Up Virginia, Battiston said the pro-LGBTQ crowd carried handmade signs.

In a video posted after the meeting, Brenda Tillett, the leader of Stand Up Virginia, bragged about getting hundreds to attend. She also acknowledged having the Fairfax County Republicans send a call-out to people to attend.

“This is not just isolated to Loudoun County. This is Fairfax County. That is why we came out in droves,” she said.

The opposition to CRT for many harks back to similar protests against desegregating schools.

Although last night was the final school board meeting until June, the conflict doesn’t appear likely to resolve itself in the near future. On Wednesday, anger and accusations continued flying on social media.

“The anger over people’s children is boiling over and now elected officials are scared of their own constituents,” tweeted Ryan Girdusky, who’s recently started a political action committee to support school board candidates who oppose CRT. “Good.”