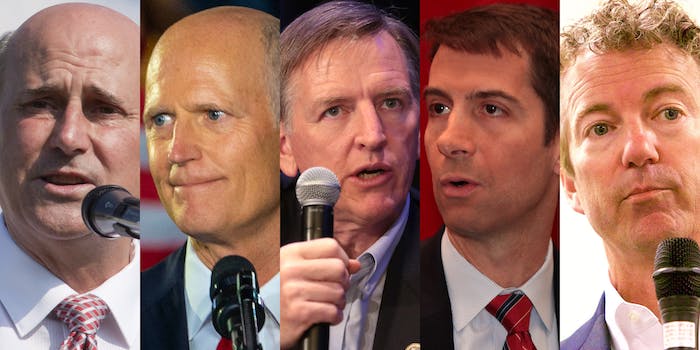 Do they actually know what they are talking about?

This summer’s hottest boogeyman among Republicans is “Critical Race Theory.” It’s been name-checked over 1,300 times on Fox News in the past few months, per a Media Matters study. In Congress, Republicans have pushed bills to keep the theory out of the military and have made a lot of noise about the need to keep it out of schools. But when the Daily Dot asked Republicans for a definition of Critical Race Theory, they were less unified in their understanding of it. They were hardly even coherent in their understanding of it.

Rep. Mo Brooks (R-Ala.) told the Daily Dot that Critical Race Theory is “different things to different people but the bottom line is that it is a distorted view of racism.” Asked how Critical Race Theory distorts racism, Brooks said, “by trying to turn it into a positive when it is a negative.”

Most Republicans were unwilling to even offer a definition, Sen. Rand Paul (R-Ky.) and Sen. Tom Cotton (R-Ark.) both refused to give any answers. Sen. Rick Scott (R-Fla.) of Florida told the Daily Dot, “there’s a lot of people that have a lot of different definitions.” Asked for the Senate Republicans’ definition of Critical Race Theory, Scott said, “I don’t think the Republican caucus has a definition.” In early June, Scott introduced a resolution on Critical Race Theory which defines the theory as “an academic concept based on the belief that racism is embedded in American society, highlighting the differences between Americans instead of the many commonalities that unite them.”

Some Republicans were a bit more creative in their answers, like Rep. Louie Gohmert (R-Texas) who responded, “you give me a definition and I’ll tell you if I agree with it.” Rep. Paul Gosar (R-Ariz.) was similarly elusive, when asked for a definition, he responded “you find me one.”

If there is a definition to Critical Race Theory, it is hard to nail down, because it’s a relatively new theory and has mostly been discussed in universities and law schools, a world away from the screeching chyrons of Fox News programs. The American Bar Association explains that Critical Race Theory is “a practice of interrogating the role of race and racism in society that emerged in the legal academy and spread to other fields of scholarship.”

But that hasn’t stopped state legislatures, which have already begun rolling out laws banning educators from teaching Critical Race Theory in the classroom. A number of education groups have condemned those laws. In a statement, the groups (which included PEN America and the American Association of University Professors) explained “Purportedly, any examination of racism in this country’s classrooms might cause some students ‘discomfort’ because it is an uncomfortable and complicated subject. But the ideal of informed citizenship necessitates an educated public.”

But while Critical Race Theory dates back to at least the 1980s, most Americans probably didn’t hear about it until 2020, when it became a talking point among Republicans in the months before the election. In September, a self-styled investigative journalist appeared on Tucker Carlson and declared that Critical Race Theory was overtaking the federal government. President Donald Trump soon issued a wacky memo claiming that “press reports” showed critical race theory was running rampant in the Executive Branch and ordered agencies to identify “all contracts or other agency spending related to any training on ‘Critical Race Theory’.”

Nothing seemed to come out of the Trump White House memo, which was issued just a month before the 2020 election and was a textbook Trump play aimed at stirring fear-of-others in suburban voters.

But with Republicans hoping to return to power in Washington, they have doubled down on Critical Race Theory as their latest boogeyman, even if they have no idea what it means.