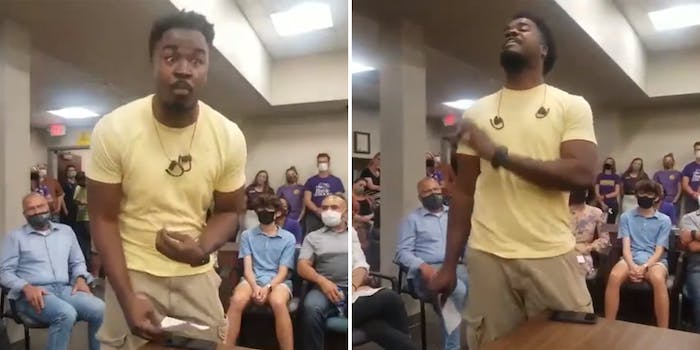 'How do I have two medical degrees if I'm sitting here oppressed?'

A viral video shows a supposed “concerned parent” believing he’s destroying the idea of critical race theory at an Illinois school board meeting.

However, the parent is not just any parent. He’s Ty Smith, a conservative radio host, so-called “Modern Renaissance Man” on YouTube, and father of two nearly-adult sons. And his racist-catering and undercooked screed on personal achievement, interpersonal racism, and prejudice fails to approach any judgment of systemic racism in the macro into micro manifestations, from which critical race theory is based.

The video, also posted to the “Public Freakout” subreddit, shows Smith saying CRT will “teach kids how to hate each other.”

The video has received the thumbs-up from far-right entities and personalities, from the Daily Caller to embattled Rep Marjorie Taylor Greene (Ga.).

“You’re going to deliberately teach kids that ‘he’s got it better than you because he’s white,'” Smith says to a group of applauding white people.

“You’re gonna tell a white kid, ‘Oh, Black people are all down and suppressed.’ How do I have two medical degrees if I’m sitting here oppressed?”

Smith also claims Black people he comes in contact with are anti-CRT.

Smith runs a conservative-leaning YouTube channel, where he appeases his fans by making reaction videos as a Black man watching country music videos. He also hosts “Cancel This,” a conservative radio talk show in central Illinois.

There’s a rumor circulating online that claims Smith is conservative commentator Candace Owens’ brother. He even has a post saying he is her “crazy big brother,” after a conservatives’ hang last October at the White House.

However, Smith says he grew up with a brother in Decatur, Illinois. Also a critic of critical race theory, Owens was raised, in part, by her grandparents in Stamford, Connecticut. And in another post, Smith refers to Owens as his “little sis”—quotes and all—implying they are not actually related and possibly just have a close relationship.

During a segment on Fox News, Smith says that throughout his life, he’s asked people, “Where is the systemic racism? Where is the white man?” He claims no one could show him hard proof, though decades of publications and data on which critical race theory is based exists.

On Twitter, many viewers are appalled and called out Smith’s foolishness.

Some even questioned Smith’s “medical degrees.”

“It acknowledges that ever-present implicit racism that exists in many people,” @dbroseEnt continued. “The jive shit that Ty Smith wants to say about ‘I’m not oppressed because I did a thing’ is so weak as an argument against CRT.'”

The Daily Dot reached out to Ty Smith for comment.