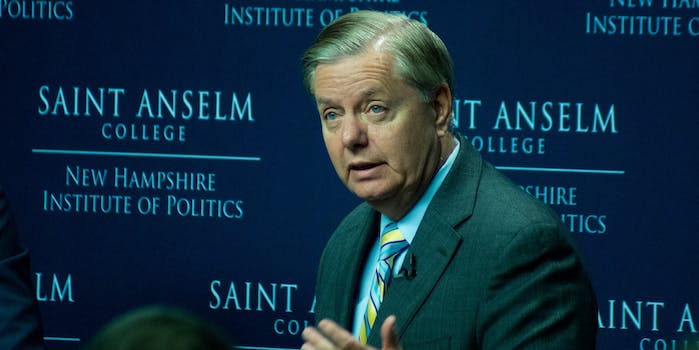 'I worry about Russia.'

Sen. Lindsay Graham (R-S.C.) has called for a congressional investigation into allegations that hackers breached Democratic Party institutions in an attempt to influence the U.S. presidential election, at the behest of Russia’s government, led by President Vladimir Putin.

“Assuming for a moment that we do believe that the Russian government was controlling outside organizations that hacked into our election, they should be punished,” Graham told reporters in Washington on Tuesday, according to the Huffington Post. “Putin should be punished.”

The proposed inquiry could put Congress at odds with the incoming administration of President-elect Donald Trump, who is seen to have benefitted from the hacks and has expressed a desire to forge a closer relationship with Russia’s government.

In October, the Department of Homeland Security and the Office of Director of National Intelligence publicly blamed Russia for orchestrating hacks against “U.S. persons and institutions, including from U.S. political organizations” that resulted in the publication of private emails from the Democratic National Committee (DNC), the Democratic Congressional Campaign Committee (DCCC), and Democratic nominee Hillary Clinton‘s campaign chair, John Podesta.

Emails stolen from these targets appeared on WikiLeaks, DCLeaks.com, and through the website of a hacker going by the name Guccifer 2.0, who claimed to have hacked the DNC.

The breaches and publication of stolen emails resulted in the ousting of several top DNC officials, including chairwoman Debbie Wasserman-Schultz, for the appearance of collusion between the DNC and the Clinton campaign against the campaign of challenger Sen. Bernie Sanders, and otherwise served to create an air of scandal around Clinton’s White House bid.

Graham, who has publicly condemned Trump since losing to him in the Republican presidential primary, vowed to help Trump’s presidency succeed, but stressed his concerns over Russian interference in U.S. domestic affairs.

“Clearly, me and the Donald have issues, and I will do everything I can to help him because he will be commander in chief in dangerous times,” Graham said. “I worry about Russia.”