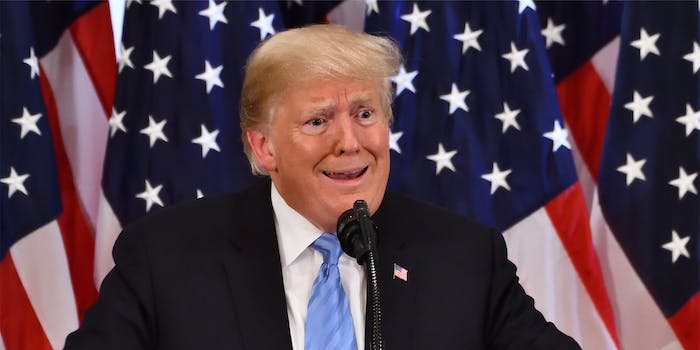 Do they need to look THIS hard for the president's racism?

They really need not try so hard.

After all, Trump has banned Muslims, put immigrant children in cages, called Mexicans rapists and Black Lives Matter protesters thugs, and so much more. He even once said he didn’t know enough about the KKK to condemn it.

Just today, he called the words “Black Lives Matter” a symbol of hate.

But here we are.

Yesterday, Trump tweeted with his typical dramatic flourish, “This is a battle to save the Heritage, History, and Greatness of our Country! #MAGA2020.”

His ever-present hordes of critics pounced on the tweet. Most common were comments agreeing that the nation is at stake, but that his presidency is what’s putting it at risk.

“It sure is, and we hope you and [Russian President Vladimir] Putin lose,” said author Jacopo della Quercia.

Others reached far deeper. Upon realizing there were 14 words in Trump’s tweet—not including the hashtag—they argued that he intentionally used that number of words as a nod to an infamous white supremacist slogan that also has 14 words.

That slogan, “We must secure the existence of our people and a future for white children,” is often abbreviated to “14 Words” or just the number 14, the Anti-Defamation League reports.

It’s a bit of a stretch, to say the least. Yet they pounced.

Some took the analysis one step further. They claim that the capitalization of “Heritage” and “History” in the middle of the sentence is a reference to “Heil Hitler.”

Apparently the capitalization of “Greatness” and “Country” is just to throw people off the Nazi scent or something.

Several opined that notorious Trump adviser Stephen Miller, widely credited as the author of Trump’s immigration plans, was responsible for the tweet.

As the Daily Dot has previously reported, Miller pushed racist ideology and websites in hundreds of leaked emails to a now-former Breitbart editor.

They also claimed that the tweet comprised 88 characters in yet another “Heil Hitler” reference. White supremacists use 88 as code for the salute to Adolf Hitler.

But according to Microsoft Word’s character count, it had 87 characters. And, as long as we’re counting, 15, rather than 14, words.

This isn’t the first time the president’s opposition got out their calculators to looking for racist dog whistles. In June, people insisted that the campaign had intentionally posted a Facebook ad asking people to sign a petition to label antifa a terrorist group 88 times.

They also said that the first paragraph in the ad, which included a Nazi symbol that got it the boot from Facebook, had 14 words.

But there’s no need to hunt for covert symbolism.

Tweeting about preserving heritage and history at a time when people are tearing down statues to slave traders, Confederate traitors, and others who have committed atrocities in the name of race implies that you side with the racists, and not with those condemning them.

Perhaps it would be better to focus on that rather than count words and characters and draw conclusions based on which words are capitalized.