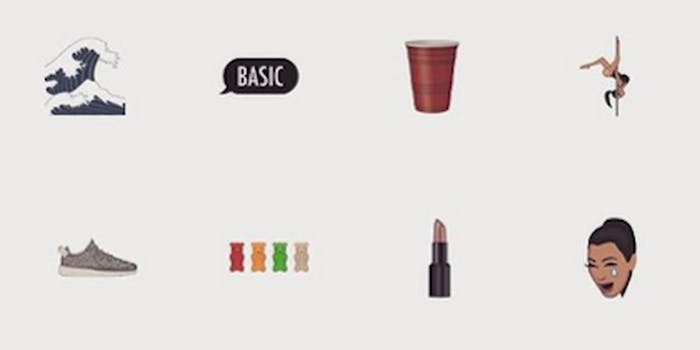 Here's how to use it in the meantime.

Kim Kardashian released an app called Kimoji this afternoon, and almost immediately there were technical problems. The app includes a full suite of Kim-themed emoji that you can add to your phone’s keyboard for $1.99, but very few people have been able to use it yet because of several glitches.

For starters, searching “Kimoji” in Apple‘s App Store doesn’t yield her app, so fans looking to download it have no way to navigate there organically. Luckily Kardashian put links on Twitter and Instagram this afternoon, so the app is still easy enough to track down if you are willing to do a little digging.

But then, once you have the app downloaded and the keyboard activated, many users are having difficulty getting it to work. It seems that the keyboard disappears or locks up for most people almost immediately after they’ve downloaded it:

@KimKardashian There's a glitch though everytime u change keyboards & go back 2 the KIMOJI keyboard they disappear pic.twitter.com/lzrkLTJe4W

Apparently the crashing is due to unexpectedly high download rates, so after a few hours of fan confusion, Kardashian took to Twitter to calm the masses with a series of explanations:

Apple, I'm so sorry I broke your App Store!!!

I can't believe so many people downloaded my KIMOJI app that it affected the entire app store!

We worked so hard on this app & we know there are some issues due to the massive downloads that the whole tech team is so working on!

My Kimoji app will be up and running again soon! They are also working on fixing the search so u can easily find it!

Hopefully her developers will have a fix for the glitches soon, but in the meantime there are two options that seem to help nudge the keyboard into working:

At least there’s a Kim cry face emoji to help us through this.