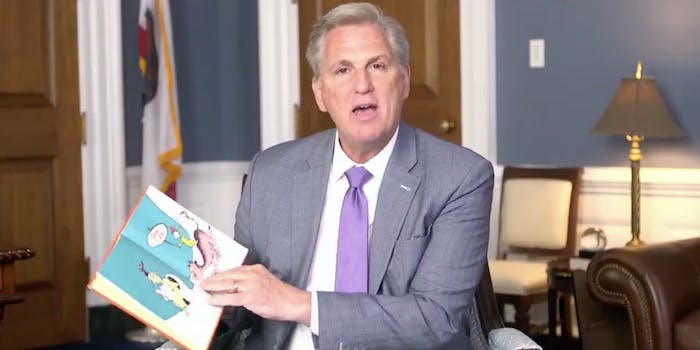 'Green Eggs and Ham' is not even among the Dr. Seuss books going out of circulation.

When it was announced that six little-known Dr. Seuss books would no longer be published due to a decision made purely by the company that manages the famed children author’s estate, conservatives immediately blamed “cancel culture.”

In a transparent attempt to capitalize on the outrage, House Minority Leader Kevin McCarthy released a five-minute video on Friday in which he reads Dr. Seuss’ Green Eggs and Ham, noting: “I still like Dr. Seuss” and asking people to retweet the video “if you still like him too!”

The attempt to conflate a private company’s decision to stop publishing certain books after extensive research into the impact its racist depictions have on young children with “cancel culture,” despite there having been no major public campaign to remove the books from publication, has generally been seen as disingenuous.

McCarthy’s pile-on makes just as little sense. Green Eggs and Ham is a well-loved children’s book that will remain in circulation and was not a part of the online discourse surrounding Dr. Seuss at all.

As such, people were quick to dunk on the California representative, accusing him of exacerbating drama and divisiveness where there didn’t need to be any.

“The Seuss Foundation made its own decision regarding certain books in their catalogue; this is literally faux outrage, Kev,” one user responded on Twitter.

Another suggested that McCarthy knows perfectly well “that the family decided on their own to cease publishing the books which contained insensitive material. He knows that Green Eggs and Ham wasn’t one of those books…But he doesn’t care.”

Others dared him to go ahead and read one of the books actually being pulled from circulation, knowing that he wouldn’t because they are genuinely offensive.

Considering that we’re still in the middle of a pandemic, still in the middle of an economic crisis affecting scores of non-wealthy Americans, and still dealing with the fallout of various conservative leaders instigating, supporting, or excusing an attempted insurrection, a number of people watching the video suggested McCarthy put a little bit of effort into doing his actual job rather than stirring up faux outrage on Twitter.

Books go out of print every day—even unpopular books by otherwise popular authors. Even if that decision is made in part due to offensive aspects of a book, that does not mean that they’re being “banned.” And it certainly doesn’t mean that anyone should have to listen to a U.S. representative reading rhymes when he should be focused on literally anything that actually impacts his constituents.