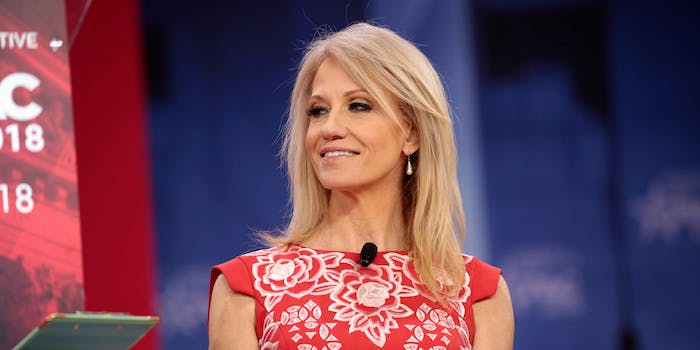 The comments did not sit well with people online.

Kellyanne Conway, a senior member of President Donald Trump‘s administration, suggested to the hosts of Fox & Friends on Monday that “anti-religiosity” and “the unfunny people on TV shows” were partly to blame for the shooting at a Pittsburgh synagogue over the weekend.

The attack at Tree of Life Congregation Synagogue on Saturday left 11 people dead. The suspected shooter, Robert Bowers, shouted anti-Semitic epithets as he shot into the crowd, USA Today reports.

Bowers told a SWAT officer after his arrest that he wanted all Jews to die because they “were committing genocide to his people,” according to CNN.

Conway discussed the attack with Fox & Friends and seemed to imply that “anti-religiosity” was to blame for it occurring.

“The anti-religiosity in this country that is somehow in vogue and funny–to make fun of anybody of faith to be constantly making fun of people who express religion–the late night comedians, the unfunny people on TV shows; it’s always anti-religious,” she said. “And remember, these people were gunned down in their place of worship, as were the people in South Carolina several years ago. They were there because they were people of faith, and it’s that faith that needs to bring us together. This is no time to be driving God out of the public square–no time to be making fun of people.”

Conway’s remarks did not sit well with people online.

Vampire Barbie wants us to blame the (((late night comedians))) for the murder of 11 elderly Jews people. https://t.co/DSETXFaehQ

Conway's suggestion that both the Pittsburgh synagogue massacre and the Charleston church massacre were motivated by something other than white nationalism is a dangerous lie. https://t.co/225ojlfKc0

This takes the cake for worst takes.

This isn’t anti-religiosity. This is hate and this hate is rooted in anti-Semitic rhetoric, period. https://t.co/lEPhF4u591

We have to vote. We have to fight back against this hatred. https://t.co/LQXttZ7oY0

Bowers was charged on 29 different counts, including “obstruction of exercise of religious beliefs resulting in death.”