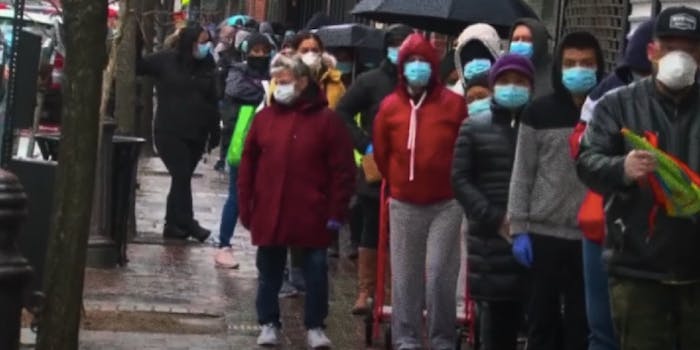 'Under the leadership of Donald Trump, our country is weaker and sicker and poorer.'

Political action committee the Lincoln Project released an incendiary video on Monday titled “Mourning in America,” which highlights President Donald Trump’s inactivity in the face of the coronavirus pandemic and the havoc he has wrought across the United States over the last four years.

A group of disenfranchised Republicans—including attorney George Conway and communications strategist Steve Schmidt—founded the Lincoln Project in late 2019 with the purpose of preventing Trump’s reelection in 2020. The group’s “Mourning in America” video plays off of Ronald Reagan’s 1984 “Morning in America” campaign commercial to highlight the staggering death toll and the unemployment rate in the U.S. due to the coronavirus.

“Today, more than 60,000 Americans have died from a deadly virus Donald Trump ignored. With the economy in shambles, more than 26 million Americans are out of work—the worst economy in decades,” a narrator says. “There’s mourning in America, and under the leadership of Donald Trump, our country is weaker and sicker and poorer.”

The “Mourning in America” video had two immediate effects. The first, more predictable one: a rage-fueled tweetstorm from Trump, who slammed the Lincoln Project members as “RINO Republicans” and “loser types” and referred to Conway as “Moonface.”

Trump notably did not share the “Mourning in America” video; he only referenced it. To compensate, prominent Democrats and anti-Trump Republicans united on Twitter to mock the president’s meltdown and boost the video themselves.

“Here’s the @ProjectLincoln ad that got @realDonaldTrump so hot & bothered that he launched a midnight-madness-sale level attack against us at 1:00 am,” Lincoln Project member Jennifer Horn tweeted. “He would probably hate if you retweeted it. #Countryoverparty #Rememberinnovember.”

Ultimately, the Lincoln Project accomplished several things with “Mourning in America.” It simultaneously highlighted Trump’s mismanagement of the coronavirus pandemic, while infuriating the president past the point of comprehensibility and giving his critics an easy opportunity to roast him. And according to Conway, it could just be the beginning.