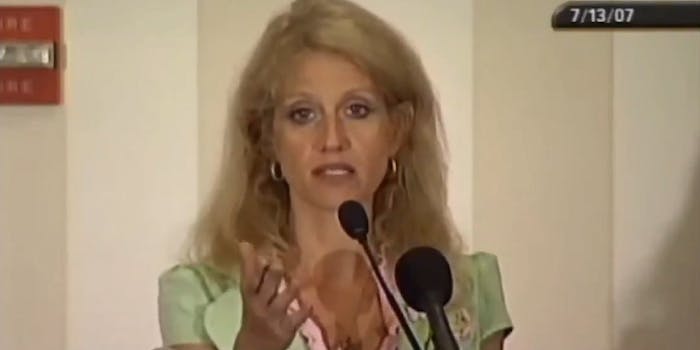 As campaign manager and later counselor to President Donald Trump, Kellyanne Conway is no stranger to sparking headlines with her many televised appearances. But her latest quote dominating newsfeeds is more than a decade old. A recently recirculating video from 2007 shows her threatening to use a firearm to perform an abortion, the Huffington Post reports.

The C-SPAN clip resurfaced on Mediaite during a week when the pro-life advocate and top White House aide has been particularly outspoken on the subject. During a Monday evening appearance on Fox, Conway questioned why abortion rights are referred to as “women’s issues” and falsely claimed Virginia Gov. Ralph Northam’s support of a late-term abortion bill was condoning infanticide in the midst of his racist yearbook photo scandal.

The video clips a portion of her 2007 speech to the College Republican National Committee where she lambasts feminists and gender studies scholars as dissimilar to “normal women.”

“I always love to say to those gender studies people: If you say ‘abortion,’ or ‘stem cells’ or ‘guns’ one more time, I’m going to perform one of those on you,” Conway says in the video. “Because, you know with a gun, because you, by implication, are suggesting that women can’t do the math.”

Here's Kellyanne Conway threatening to "perform" an abortion on feminists "with a gun." #adultsInTheRoom pic.twitter.com/zchqQbqeu5

Whether a serious threat or a bit of dark humor, the sentiment of Conway’s statement is particularly gruesome. That fact wasn’t lost on Twitter when the video also floated around social media in December.

Is that a fact or an alternative fact?