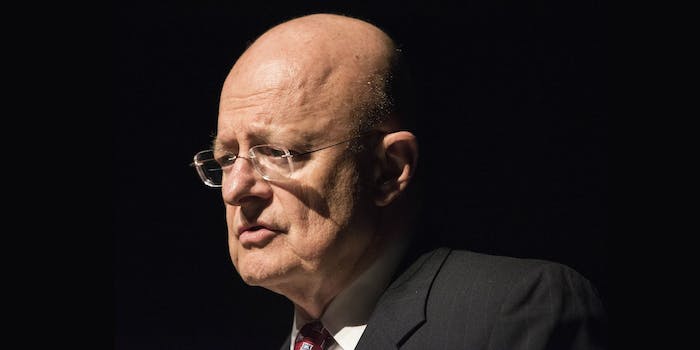 The case against Russia just faced its first hearing.

During the first Senate hearing on the issue since Election Day, Senate Armed Services Committee Chairman John McCain (R-Ariz.) stressed that the purpose of the committee’s investigation was not to dispute election results but to hold Russia accountable for tampering with the election.

“The goal of this review is not to question the outcome of the presidential election, nor should it be,” said McCain.

Lawmakers questioned both Director of National Intelligence James Clapper and Adm. Mike Rogers, director of the NSA and head of U.S. Cyber Command and the Central Security Service. The officials supported President Barack Obama‘s sanctions on Russia, and both Republican and Democratic lawmakers said even more sanctions on Russia are on the horizon.

“I think what Obama did was throw a pebble. I’m ready to throw a rock,” said Sen. Lindsey Graham (R-S.C.)

The hours-long hearing covered a lot of ground and touched on a number of complex but crucial items. Here are the key moments you need to know about.

1) The Kremlin’s involvement is “certain”

The intelligence community believes that the “highest level” of Russia’s government—potentially including Russian President Vladimir Putin—was involved in orchestrating cyberattacks against Democratic Party institutions and operatives.

In a joint statement to the Senate panel by Clapper, Rogers, and Undersecretary of Defense for Intelligence Marcel J. Lettre II, stated that Russia posed a major threat to the United States because of its “highly advanced” cyber program and sophisticated tactics.

“We assess that Russia’s senior-most officials could have authorized the recent election-focused data thefts and disclosures, based on the scope and sensitivity of the targets,” their statement reads.

As the officials were testifying, a classified report by the intelligence community on Russia’s election hacks ordered by President Barack Obama was sent to the White House, according to the Associated Press.

Simply rigging the election in favor of President-elect Donald Trump—who has made pro-Putin statements throughout his career, campaign, and as president-elect—does not appear to be Russia’s only goal behind the hack. “There’s actually more than one motive,” Clapper told senators, referring to Russia’s goals in the scheme.

One thing the unclassified report won’t cover is whether Russia’s actions altered the outcome of the U.S. presidential election.

“We have no way of gauging—at least the intelligence community doesn’t—the impact of … [the hack] on the choices the electorate made,” said Clapper.

Clapper reiterated statements by McCain and other lawmakers that Russia’s intervention in the U.S. election did not extend to tampering with ballot counts. “They did not change any vote tallies or anything of that sort,” said Clapper. Instead, Russia focused on spreading disinformation.

“This was a multifaceted campaign. Hacking was only one part of it,” Clapper said. “It also entailed classical propaganda, disinformation, fake news.”

The spread of intentionally “fake news” became a major talking point after the election thanks to its popularity on Facebook and other social media sites. Like the election hacks, however, it is difficult to quantify conclusively what effect “fake” or otherwise misleading news had on American voters.

Clapper and Rogers dismissed claims by WikiLeaks founder Julian Assange, which were later repeated by Trump on Twitter, that Russia did not leak stolen emails and documents to the radical transparency publication. WikiLeaks has claimed repeatedly that Russia was not its source for tens of thousand of emails taken from the DNC and Hillary Clinton campaign chair John Podesta and published by WikiLeaks.

McCain asked both men if Assange had any credibility.

“Not in my view,” responded Clapper. Rogers seconded him. Both officials also agreed that Assange has put lives in danger through the publishing of U.S. government documents.

(Clapper also incorrectly stated that Assange, who has been living in the Ecuadorian embassy in London for four years, has been indicted over allegations of rape in Sweden. He has only been questioned.)

Trump was criticized on Wednesday by Republicans and Democrats alike for quoting Assange on Twitter as saying “a 14-year-old” could have been behind the DNC hacks. Trump also retweeted an interview that Sean Hannity conducted of Assange in which he denied Russia’s involvement in the hack. Before the hearing commenced, Trump said that he was sharing the Assange quote so “the people to make up their own minds as to the truth.”

Even Sen. Tom Cotton (R-Okla.), a Trump supporter and Iraq veteran, sided with the intelligence community over WikiLeaks.

“I have a lot more faith in our intelligence officers—serving around the world—and the very smart, experienced analysts that we have here in the nation’s capital than I do in people like Julian Assange,” Cotton said on MSNBC’s Morning Joe on Thursday.

But Cotton added that he thought the Senate should wait until the release of next week’s intelligence report.

Trump will soon inherit the intelligence community he has repeatedly criticized. In this light, Sen. Claire McCaskill (D-Mo.) asked the intelligence officials whether Trump’s comments had any impact on morale at the NSA or other intelligence agencies.

“We haven’t done a climate survey. I hardly think it helps it,” said Clapper. But Rogers—who earlier in the hearing raised concerns about how difficult it has been for U.S. intelligence agencies to recruit technically skilled cyber workforce—made it clear that Trump’s negative attitude towards intelligence could cause long-standing damage.

“I don’t want to lose good, motivated people who want to help serve this nation because they feel they are not generating value to help that nation,” Rogers said.

The admiral went on to say that he felt the success of the intelligence community was dependent on the confidence of the nation’s leaders.

“Without that confidence,” Rogers continued, “I just don’t want to see a situation where our workforce decides to walk.”