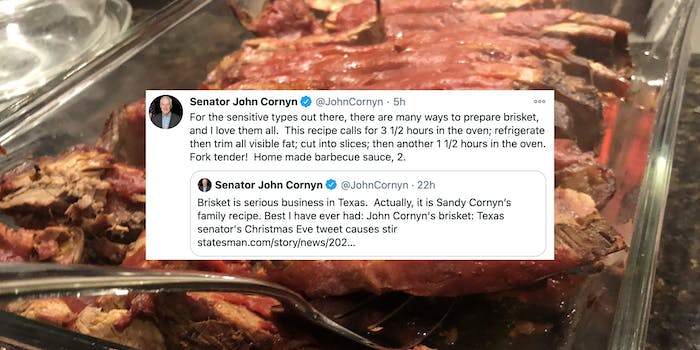 Sen. John Cornyn says it's the best brisket he's ever had.

Sen. John Cornyn (R-Texas) is striking back at Twitter users who ruthlessly mocked his brisket dinner on Christmas Eve.

The original tweet, which featured a picture of what Cornyn described as a “Brisket family tradition,” was bombarded with more than 12,000 comments from offended meat fans.

The backlash was largely unsurprising given how serious Texas residents take their BBQ, especially brisket.

The picture was also flooded with complaints from many who were outraged over the failure of legislators to approve much needed stimulus aid amid the ongoing coronavirus pandemic.

Cornyn finally pushed back on the widespread criticism on Saturday by defending his brisket-cooking abilities.

“For the sensitive types out there, there are many ways to prepare brisket, and I love them all,” the senator tweeted. “This recipe calls for 3 1/2 hours in the oven; refrigerate then trim all visible fat; cut into slices; then another 1 1/2 hours in the oven. Fork tender! Home made barbecue sauce, 2.”

Cornyn also claimed that the recipe had originated from the family of his wife Sandy and that it was the best brisket he’s ever had.

Much like his initial tweet, Cornyn’s attempt to defend himself was similarly flooded with remarks about struggling Americans and the brisket.

“For the sensitive Senators out there, 30k+ Texans dead from a virus you joked about is not just a number,” @mrbongostx said.

Although some users argued that the roasting of Cornyn was unnecessary, Texas natives argued that Cornyn’s brisket display is a reflection on their state.

“It’s… look. When you literally represent Texas, and you present THIS as your exemplar of our signature meat dish?” @shksprtx said. “I’ve cooked brisket in the oven, but always with my head down, the shades drawn, and no cameras allowed.”

Whether Cornyn will proudly display his brisket again next year remains to be seen. The senator will very likely think twice before tweeting out pictures of his dry meat in the future.