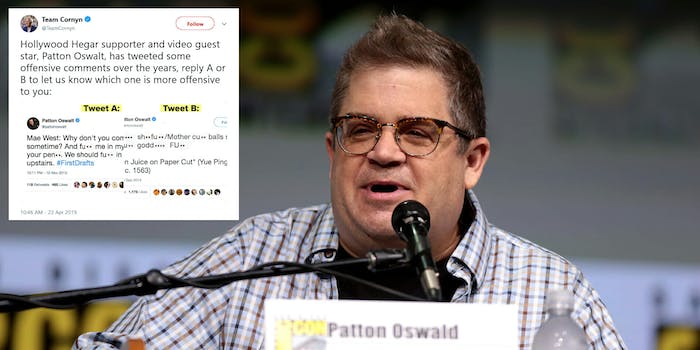 Sen. John Cornyn (R-Texas.) tried on Tuesday to attack comedian Patton Oswalt after he appeared in a campaign ad for his Democratic challenger in the upcoming election.

MJ Hegar announced on Tuesday that she would run against Cornyn in the 2020 Senate election, publishing a video that included a cameo from Oswalt and focused on a viral ad she released in 2018 called “Doors.”

“But MJ, what if people haven’t seen ‘Doors?'” Oswalt says in the ad as it highlights his praise for the former video.

Apparently, Cornyn didn’t like Oswalt’s cameo in the ad, because he tried to call out the comedian for his past tweets. No one seemed to be on board with his call out.

“Hollywood Hegar supporter and video guest star, Patton Oswalt, has tweeted some offensive comments over the years, reply A or B to let us know which one is more offensive to you:” the senator wrote, linking to two tweets from 2013 and 2014 and censored words they deemed unfit for retweeting.

Hollywood Hegar supporter and video guest star, Patton Oswalt, has tweeted some offensive comments over the years, reply A or B to let us know which one is more offensive to you: pic.twitter.com/gXgPvstK6V

The tweet was swiftly mocked and ratioed, garnering more than 5,600 replies compared to just 55 retweets and 189 likes as of Tuesday evening.

The Texas lawmaker wasn’t finished. Instead of letting a bad tweet die, Cornyn’s team tweeted through it, posting five more from Oswalt where he used words that Cornyn didn’t deem sensible.

But wait… there’s more! Another reminder that Hollywood Hegar embraces this celebrity: pic.twitter.com/wHgyVNeLUO

Looks like someone skipped a few days of vetting classes. pic.twitter.com/Kp9heJQHAM

All of them were ratioed almost as badly as the first one.

Oswalt has replied to the tweets from the Texas lawmaker, including addressing why he was being attacked.

“If you’re wondering why I’m being gummed by @TeamCornyn, it’s because I’m in this ad for the extraordinary @mjhegar. @JohnCornyn is scared shitless — he won’t even debate her — so this is the straw he’s grasping at. Good luck, Pop-Pop! http://mjfortexas.com,” he wrote.

Meanwhile, the Republican Party called on Hegar to disavow Oswalt.

Cornyn, in the past, used Twitter to fave pictures of Sports Illustrated swimsuit models.