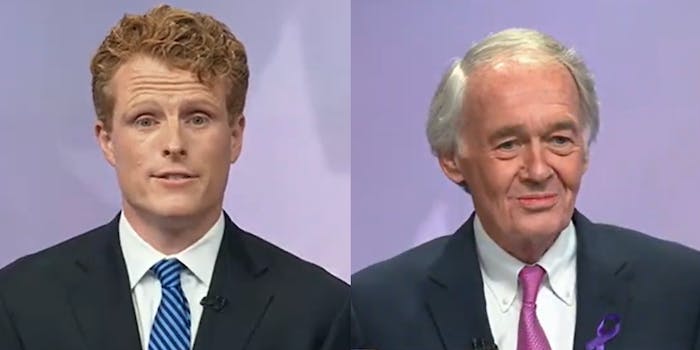 Joe Kennedy says he was ‘bullied’ by mean tweets

Supporters of Markey online asked theater stars to drop out of a Kennedy fundraiser.

The Senate primary between Sen. Edward Markey (D-Mass.) and his challenger Rep. Joe Kennedy III (D-Mass.) is heating up.

During a debate on Sunday, the Senate hopeful blamed a fundraiser of his being canceled on “bullying” from Markey supporters.

A “Broadway Sings for Joe Kennedy III” fundraiser last week was canceled after theater stars scheduled to appear in the pre-taped event were met with online criticism from supporters of Markey’s.

As Boston Magazine points out, numerous theater stars that were scheduled to take part in the event were flooded with tweets from people who asked them not to support Kennedy and highlighted Markey’s voting and legislative record.

Soon, several of them acknowledged the comments, thanking them for being “passionate” and for using “their platform in a way that aligns … with their values.”

On Sunday, Kennedy tried to frame the backlash as bullying when asked about the cancelation by the moderator.

Markey, when asked about what happened, said many of the posts were “young people” who wanted to “talk about the issues that they felt were important to those Broadway stars.”

“I don’t think that’s what happened at all,” Kennedy said. “There were supporters of mine that tried to put together an event that were targeted. One of Senator Markey’s supporters literally tweeted that ‘bullying works.'”

There were some tweets that were overtly negative, such as calling the Massachusetts congressman a “sentient ham” and saying people who don’t vote for Markey have “pudding brain.”

After the event was canceled, Kennedy’s campaign called the tweets “cyber-bullying,” adding that “the level of vitriol Senator Markey and his supporters have unleashed during this campaign is unprecedented,” according to Theatre Talk Boston.

When Kennedy was pressed by the moderator if he thought the stars backed out after learning that Kennedy was challenging Markey, he sidestepped the question and said that he was “proud of the support that we have from young progressives.”

Kennedy’s response to the question on Sunday caught the attention of many people online.

The idea of framing online supporters as bullies is nothing new.

Sen. Bernie Sanders (I-Vt.) was accused of having “Bernie Bros” online during both of his presidential campaigns.