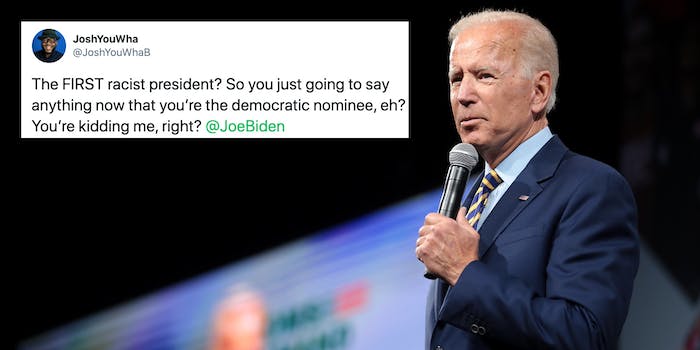 Speaking during a virtual town hall event, Biden made the remark after being asked about Trump referring to COVID-19 as the “China virus.”

“What President Trump has done in his spreading of racism… the way he deals with people based on the color of their skin, their national origin, where they’re from, is absolutely sickening,” Biden said.

The Democratic presidential candidate went on to claim that “no sitting president has ever done this,” from either political party.

“No Republican president has done this. No Democratic president,” Biden said. “We’ve had racists, and they’ve existed. They’ve tried to get elected president. He’s the first one that has.”

News of Biden’s remarks reached Trump soon after, who responded by labeling himself as one of the best presidents ever for the Black community.

“I’ve done more for black Americans than anybody with the possible exception of Abraham Lincoln,” Trump said. “No one else has even been close.”

Realizing the historical inaccuracy of his remark, Biden’s campaign scrambled to issue a clarifying statement on the matter.

“There have been a number of racist American presidents, but Trump stands out — especially in modern history — because he made running on racism and division his calling card and won,” said Biden’s senior campaign adviser Symone Sanders. “He deliberately foments both, intentionally causing indescribable pain because he thinks it advantages him politically.”

But attempts to clean up Biden’s comments were too little too late for many, who expressed their disbelief on Twitter.

“He is the first if you’re listing them BACKWARDS,” @ambermruffin wrote.

Others noted that at least a dozen presidents were known to have owned slaves dating all the way back to the country’s founding.

Unsurprisingly, supporters of the president used the incident to claim that Biden was the true racist, not Trump. Others pointed to previous statements from Biden’s long political career and his support of controversial legislation.

Biden’s statement is just one of countless gaffes that have plagued his campaign since the beginning. But, according to the latest polls, voters appear to feel that Biden’s linguistic fumbles pale in comparison to Trump’s handling of numerous national issues, such as the coronavirus pandemic.