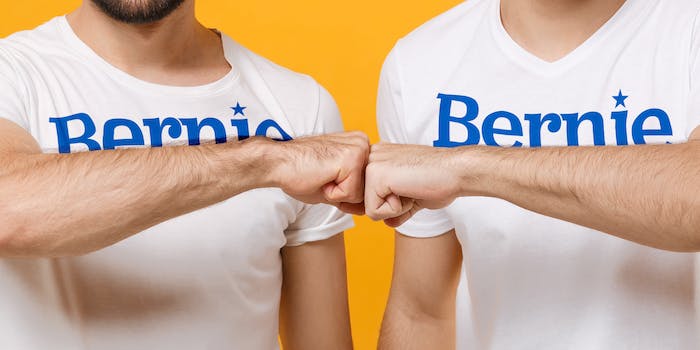 His study went viral, but the claim is not definitive.

Most discussions of the 2020 Democratic primary seem to return to one question: are some Sen. Bernie Sanders (I-Vt.) voters, known as “Bernie Bros,” actually the most toxic supporters of all the candidates?

Political figures like Hillary Clinton, Sen. Elizabeth Warren (D-Mass.), and Neera Tanden have spoken out against these vocal internet warriors. The stereotype tends to be a young, white man with a rose emoji in their Twitter display name (as a symbol of the Democratic Socialists of America) and the leftist podcast Chapo Trap House blaring through their AirPods.

They have a reputation for online bullying in the form of snake emojis, targeted harassment, and stubborn dedication to their favorite candidate.

But do they actually exist?

Last month, in a now-viral tweet, data scientist Jeff Winchell decided to analyze millions of tweets from voters across the entire political spectrum to see if Bernie Sanders supporters really are as mean as their reputation makes them seem. He incorporated Microsoft’s Deep Learning-based sentiment analysis algorithm to classify the tweets as positive, negative, or very negative in sentiment and tracked the likelihood that a supporter’s tweets fell under any of the three categories. He concluded that all candidates’ Twitter followers have the same likelihood of posting negative or very negative tweets.

“I would feel better about saying that when I have ten times more data,” says Winchell to the Daily Dot. “To say that one group [of voters] is way bad is a rather extreme inference to make.”

But according to his analysis, a Sanders supporter is no more likely to fire off an angry missive than a Biden fan.

Winchell was surprised by his own results. His initial prediction was that Bernie Sanders supporters would have more negative tweets, owing to the fact that they tend to be worse-off financially and might express the problems that stem from that negatively online.

But as Winchell points out himself, his initial study only looked at a limited number of tweets. Although he has 100 million tweets downloaded, he has only been able to manually go through eight million of them and actually categorize 600,000 of those. The process of sentiment analysis is difficult to automate, because a machine can’t parse sarcasm or more abstract ways of projecting negativity.

As an example, last month an old tweet from Joe Biden’s official account started circulating Twitter. It depicts a nervous chihuahua with the caption “RT if you’re on the left” and seems incomprehensible until a reader opens the preview image and realizes there’s another dog in the picture.

Numerous leftists retweeted it to poke fun at Joe Biden’s old and out-of-touch online persona, but a sentiment analysis might not pick up on that kind of subtlety. If numerous Bernie supporters shared an old image to make fun of it without actually replying, Winchell’s model wouldn’t be able to tell, though many would consider this type of behavior to be typical of “Bernie Bros.”

According to Winchell, that kind of interaction would be considered “neutral” by the algorithm. And it’s still hard to draw an objective line between lighthearted dunking and targeted harassment.

That would require a much more sophisticated level of machine learning to examine. Likewise when it comes to the use of the much-maligned snake emoji. “You have to look at a two-tweet conversation, and I haven’t done that yet,” admits Winchell.

The significance of the snake emoji is especially difficult to analyze. Several months into the primary, the snake emoji began popping up in Warren’s mentions after she said Bernie Sanders told her he could not believe a woman could be president.

Sanders disagreed with her claim, and some vocal supporters began comparing Warren to a snake because they felt she needlessly leaked a damaging story about a fellow progressive candidate. In response, several prominent Warren supporters put snake emojis in their display names or using the emoji against Sanders. An algorithm would have a difficult time parsing the same emoji used with two different intentions.

Winchell acknowledges the study’s limitations and plans to dig deeper. He has examined Twitter interactions between candidates’ followers, the influence of verified accounts, tweets responding to media professionals, people whose followers replied to someone without having prior interactions with them, and many other situations.

He even looked at Donald Trump supporters, who are infamous for their toxic online reputation as well.

“I only had nine Trump ones that were really bad. What can I say about nine people? Absolutely nothing.” Winchell posits.

In the future, Winchell plans to evaluate hate speech (like racist and sexist remarks)—and his hope is to better define the nebulous meaning of a “Bernie Bro.” Some critics might apply that term only to young men, others may make further class and race distinctions. It’s difficult to filter Twitter users based on these qualities.

The biggest implication of Winchell’s study is not whether one group of voters is objectively better or worse than another: rather, it’s the narratives politicians use to advance themselves. If Bernie Bros don’t really exist, will Democratic voters be forced to question the narrative behind Donald Trump supporters as well?

“I want to reduce the temperature on Twitter,” says Winchell. “The basic way of talking to other people has changed radically. I don’t think there’s been enough time for people to figure out how to do that well.”

Most Americans do not use Twitter. Rather than disavowing a small percentage of supporters, perhaps it’s in every candidate’s best interest to not lose it over anything that happens online. Unless they too want to be responsible for their supporters’ tweets.