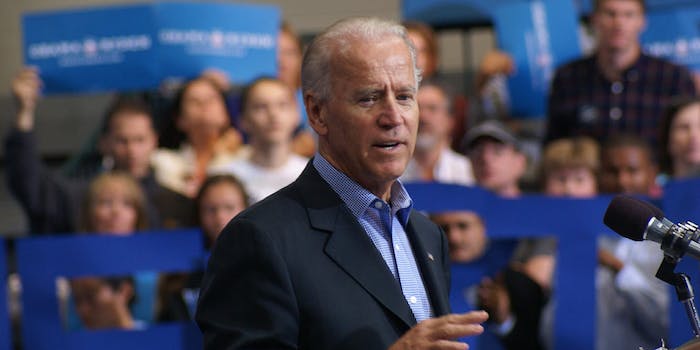 Report: Joe Biden’s first 2020 fundraiser will be with a Comcast executive

Biden could have an impact on net neutrality.

Former Vice President Joe Biden is expected to join the growing list of 2020 Democratic presidential hopefuls later this week, and his first step is reportedly holding a fundraiser with people connected to internet service provider Comcast.

Biden is expected to announce his bid for the presidency on Thursday, but afterwards will attend a fundraiser headed by David Cohen, a senior executive vice president for Comcast who has been described as one of the company’s chief lobbyists.

So Biden's very first act as a candidate will be to hold a fundraiser hosted by Comcast's top lobbyist David Cohen, who calls himself the company's "Chief Diversity Officer" to skirt lobbying rules.

If he becomes the party’s nominee, Biden—who some see as a possible front runner in the crowded 2020 Democratic presidential primary field—could have an impact on net neutrality, an issue that has recently garnered attention and support in Congress.

Most internet service providers appear not to be in favor of net neutrality, including Comcast. The company said in 2017 that it would not “block,” or “throttle” web traffic, but also deleted a pledge not to engage in paid prioritization from its net neutrality page shortly after the Federal Communications Commission announced that it planned to repeal net neutrality, according to Ars Technica.

Earlier this month, the House of Representatives voted to pass the Save The Internet Act, a bill that would restore net neutrality rules. It faces a more uncertain fate in the Senate, where not all Democrats have gotten on board with the bill.

If it does not pass in the Senate, net neutrality could be on the table after the 2020 presidential election.

As Sludge points out, in 2006, the then-senator didn’t seem to believe net neutrality rules were needed.

A wide majority of other 2020 Democratic hopefuls have voiced support for net neutrality in the past, with several of them bringing it up during their campaigns.

Update 5:32pm CT, April 23: Comcast told the Daily Dot it supports net neutrality, but not Title II regulations, echoing many sentiments brought up by Republicans amid the debate over the Save the Internet Act. A company spokesperson added that it hasn’t “entered into any paid prioritization agreements.”