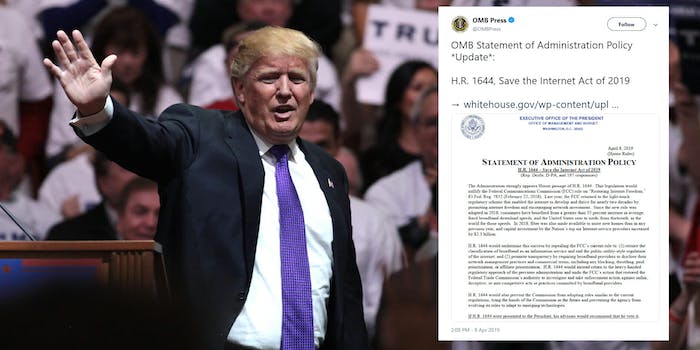 The announcement came as the House gears up for a vote on the bill.

The White House signaled on Monday that it would advise President Donald Trump to veto a Democrat-backed net neutrality bill should it make it through both chambers of Congress.

The Office of Management and Budget (OMB) released a statement on Monday that said if the Save the Internet Act—a bill that would restore net neutrality rules by undoing the Federal Communications Commission’s (FCC) repeal—were to make it to the president’s desk for a signature, “his advisors would recommend that he veto it.”

The OMB said the Save the Internet Act would “return to the heavy-handed regulatory approach of the previous administration.”

The bill is scheduled to have a full vote in the House of Representatives on Tuesday, where it is expected to pass. Its fate in the Senate is murkier.

With a Republican majority in the Senate—and one Democratic senator still to support the bill—supporters will have to wrangle support from across the aisle for it to pass.

Last year, when Democrats tried to use the Congressional Review Act (CRA) to overturn the FCC repeal, three Republican senators broke ranks with their party and voted in favor of it.

However, Republicans hold an even larger majority than they did last year and there is no guarantee that Sen. Lisa Murkowski (R-Alaska), Sen. Susan Collins (R-Maine), and Sen. John Kennedy (R-La.) would once again vote in favor of a net neutrality bill.

Rep. Mike Doyle (D-Penn.), who has spearheaded the House version of the Save the Internet Act, told CNET last month that he didn’t “see any reason” Trump would veto the bill, adding that it was “not a partisan issue.”