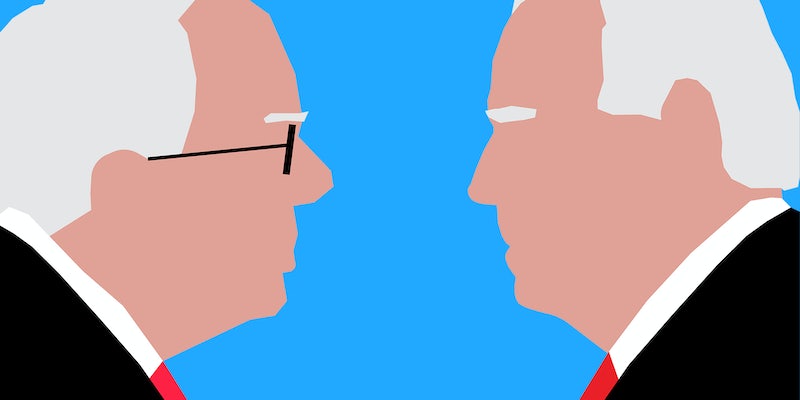 2020 Democrats: Who’s running; who has dropped out

It's a big field.

It’s official: the race to see who will take on President Donald Trump in the 2020 presidential election is underway.

And now it’s down to two candidates.

Trump long ago set his eyes on 2020. In February 2018, he named Brad Parscale, the head of the president’s 2016 campaign digital operation, as his campaign manager. As for the 2020 Democrats, a picture is beginning to form of who will be the most prominent people to try and secure the Democratic nomination for president.

And on the last day of 2018, Sen. Elizabeth Warren (D-Mass.) became the first, announcing she was forming an exploratory committee for a 2020 run. Soon enough a number of prominent Democrats have followed, announcing their own bids for the presidency.

Over 20 other candidates joined her, making for one of the most crowded fields ever. However, in the wake of Super Tuesday, the race officially narrowed. Here are the candidates left squaring off.

Former Vice President Joe Biden ended months of speculation that he would run for president, officially announcing his 2020 candidacy on April 25. Since then, he’s been leading most polls among voters, becoming the frontrunner.

Biden’s announcement video focused on Charlottesville, Virginia, both the home of Thomas Jefferson, and the site of a neo-Nazi rally in 2017.

Many Democrats were hoping Joe Biden would run in 2016, but he decided not to, following the death of his son, Beau.

Before Biden officially announced, he was beset by stories about his inappropriate behavior with women. In response, he released an awkward video promising to respect people’s space.

Biden will have to tackle questions about decisions made by former President Barack Obama’s administration, but that hasn’t hurt his polling numbers. Many Democrats appear to have a very favorable view of the former vice president and Delaware senator.

One poll by Public Policy Polling found that Biden would beat Trump in a hypothetical 2020 match-up by a 54-to-41 percent margin.

As the current frontrunner he’s taken heat from both President Donald Trump and other Democrats hoping to secure the 2020 nomination.

The president has called Biden “sleepy Joe,” among other things, on Twitter, and the two of them have an odd back-and-forth about physical feats including a fist fight, and a push-up contest.

Meanwhile, Sen. Kamala Harris and Sen. Cory Booker—both of whom are running for president—have publicly criticized Biden’s remarks he made about working with segregationist senators in the past.

Harris also called out the former vice president during the first Democratic debate, where she said it was “hurtful to hear you talk about the reputations of two United States senators who built their reputations and career on the segregation of race in this country.” 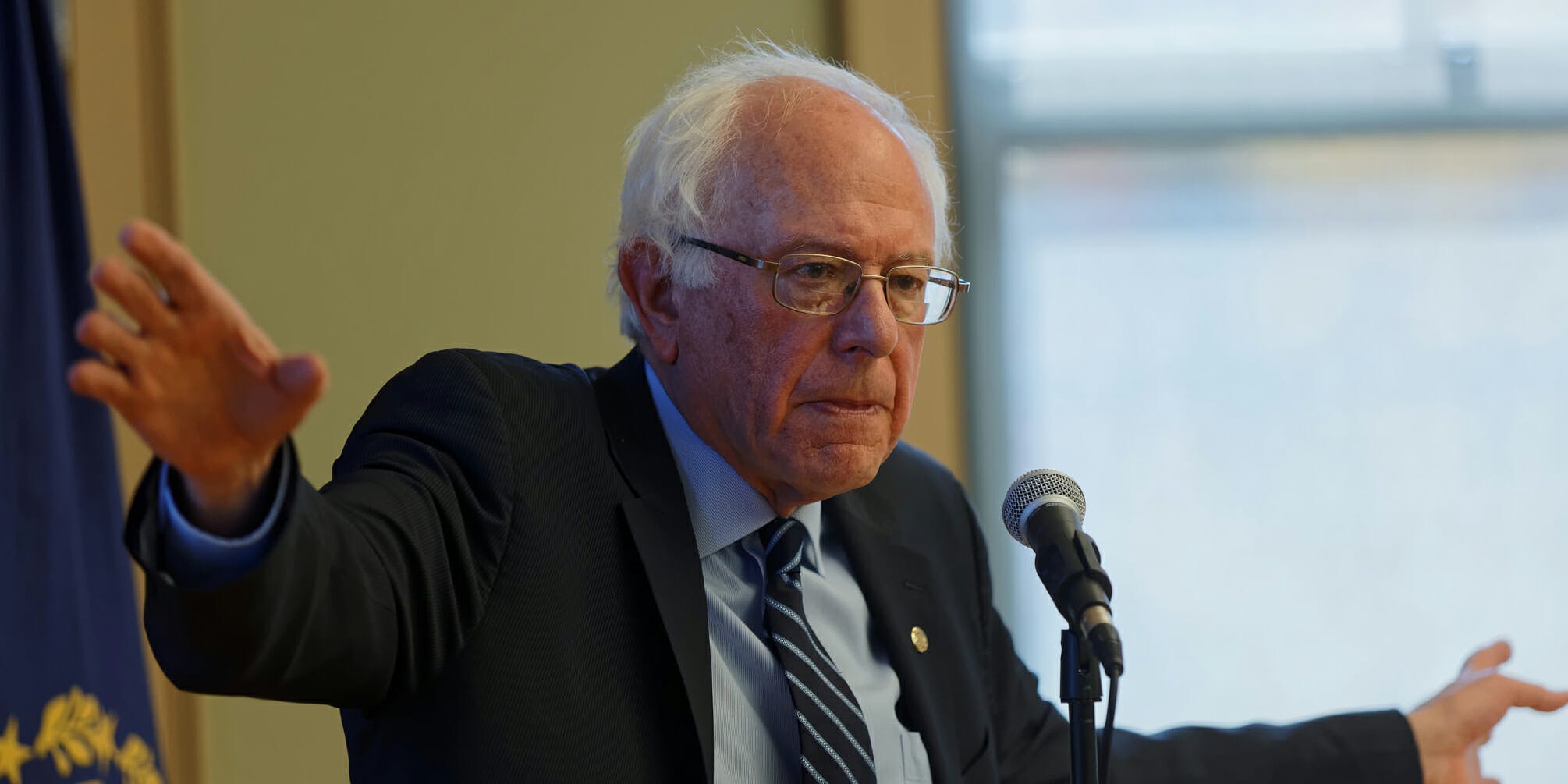 Sen. Bernie Sanders announced in mid-February 2019 that he would again seek the presidency. His surprising showing in the 2016 Democratic primary rocketed Sanders into the national consciousness, and he is arguably the most popular politician currently serving in office.

In an email to supporters on Feb. 19, Sanders touched on the policies that attracted a large number of supporters to him in 2016.

“Three years ago, during our 2016 campaign, when we brought forth our progressive agenda we were told that our ideas were ‘radical’ and ‘extreme,'” the senator wrote, according to the New York Times. “Well, three years have come and gone. And, as result of millions of Americans standing up and fighting back, all of these policies and more are now supported by a majority of Americans.”

In a video accompanying his announcement, the senator said his campaign was “about transforming our country and creating a government based on the principles of economic, social, racial, and environmental justice.”

With the announcement, Sanders became one of the likely front runners in what has become an (already) crowded 2020 Democratic primary. However, there are some drawbacks. While his impressive ability to lure younger voters to his campaign is something any person vying for the Democratic 2020 nod is sure to try to replicate, there will always be the question of whether his policy agenda would actually work without Congress firmly on his side.

So far, Sanders has steadily stayed within the top tier of candidates among voters so far in the race. However, it is surprising that his campaign has not seemed to capture the same attention that his surprise run in 2016 did.

That being said, there is no denying that he has a large number of supporters and many people willing to donate to his campaign.

In early 2018, reports suggested that Sanders has begun talking to advisers about a 2020 election campaign. The discussions focused on other possible opponents in the 2020 primaries and how Sanders could defeat them. In mid-September rumors continued to swirl, with the Hill reporting that those close to Sanders expect him to make another bid for the White House.

The speculation of a 2020 bid reached a fever pitch in early 2019 when Yahoo News reported that Sanders feeling good about his primary chances after he was “heartened” by a poll that showed him as the top candidate choice among Black and Latino voters.

As the New York Times pointed out, Sanders also is not the only hard-left progressive candidate in the public sphere anymore, which could also dent his chances of making the same impact he did during the 2016 election.

Tulsi Gabbard, a representative from Hawaii, announced a presidential bid in January. When elected in 2012, she became the first Hindu and first American Samoan member of Congress with voting power, according to FiveThirtyEight.

Gabbard is an Iraq War veteran and has strong anti-intervention beliefs when it comes to foreign policy, which could appeal to some Democratic primary voters. She also backed Sen. Bernie Sanders in the 2016 election.

However, she has faced criticism about her 2017 meeting with Syrian dictator Bashar Al-Assad and her past work with an anti-LGBTQ organization that backed conversion therapy.

Gabbard apologized for her views on the LGBTQ community in a video posted on Twitter. And she spoke about it on the debate stage, saying Americans could hopefully understand being a kid in a “conservative” family.

However, the first stage of her presidential campaign has been bumpy. In late January, Politico reported that her 2020 campaign was blindsided by her announcement and major key staff members were already leaving.

In late July, Gabbard sued Google for $50 million for allegedly infringing on her constitutional rights. Gabbard asserts that her campaign was not able to buy ads for hours after the first Democratic presidential debate, when she was getting attention from potential voters.