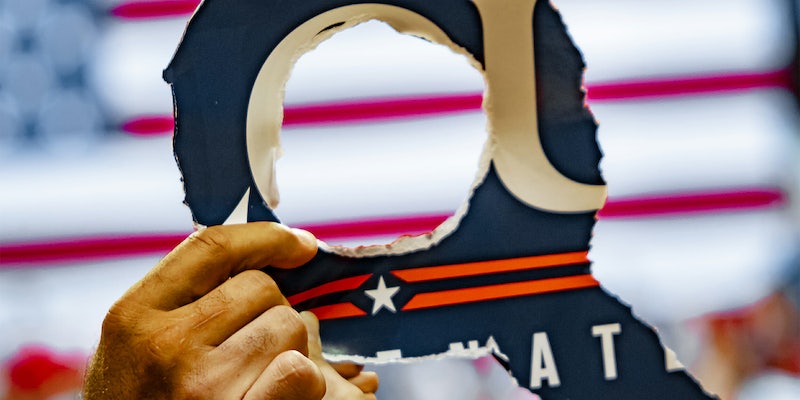 The QAnon number has tripled.

In April, the Daily Dot examined the phenomenon of the QAnon sealed indictments conspiracy theory, which holds that the Justice Department has tens of thousands of secret arrest warrants, all of which will be unsealed at the behest of President Donald Trump and his attorney general.

The sealed indictments belief plays a major role in the QAnon conspiracy theory, with the supposed unsealing of the indictments known as “the Storm” which while bring about the total destruction of the deep state and the cabal that rules the world.

And many Q believers think that because of a filing from the D.C. circuit court, that time might be at hand.

Ironincally, at the same time, Trump opponents are watching out for sealed indictments as well—those from Special Counsel Robert Mueller.

The #qanon crowd has been talking about sealed incictments against various Dems, and it appears they were half right! The sealed indictments exist, but are waiting for @realDonaldTrump and his beloved family and friends:https://t.co/Nvij4mxRO7

How can both sides of the political spectrum look at the same thing (in this case, sealed indictments in the D.C. court) and see something completely different?

To understand, it’s important to know exactly why this concept is so important.

It was shortly after the first QAnon posts that believers began passing around a number of what they referred to as the QAnon sealed indictments, taking their lead from an early Q post that made a reference to sealed indictments “outside of DC jurisdiction.”

The number began at about 4,000, that number began increasing, to the point where QAnon believers now think the Department of Justice is holding over 63,000 indictments against enemies of the people.

That number never goes down, only up—because it’s based on a misreading of how the court system works. As Daily Dot reported, the ever-expanding “sealed indictments” number is mostly made up of either sealed surveillance requests, magistrate cases, or other routine court business.

And the QAnon sealed indictments have never come to fruition. As of July 2020, there have still been no mass arrests.

But hese documents are available on PACER, the U.S. court system’s electronic filing clearinghouse. But QAnon believers misinterpret anything marked as “sealed” on the site as an indictment, when most are merely the day-to-day paperwork that drives the legal system.

So that “63,000 sealed indictments” number is nowhere close to accurate.

But to QAnon believers, none of that matters. They still have staked their conspiracy theory on tens of thousands of deep state cabalists about to be arrested, with Trump only waiting for the right moment to strike.

That moment, however, might not belong to the forces loyal to President Trump.

On Nov. 9, Observer reported a claim from an unnamed source that Special Counsel Robert Mueller had obtained “dozens” of sealed indictments against “people associated with the president, his 2015-16 campaign, and his administration.”

“Mueller is holding “dozens of sealed indictments” of people associated with the president… “Nobody who’s close to the Russians is getting out of this.”

The existence of any number of sealed indictments against Trump and his family has been a favorite claim of left-wing #resistance for years. They go back all the way back to the debunked (and nonsensical) claim that a FISA court had indicted President Trump in May 2017, and have cropped up ever since then.

All the while, legal scholars debate over whether it’s even legally possible to indict a sitting president. But while most of these claims passed without action, and often with much ridicule (see Louise Mensch’s “marshal of the Supreme Court” claim), this one seems to be different.

Acknowledging that it’s impossible to say why for sure, ABC News reported on Nov. 16 that “three dozen sealed criminal indictments have been added to the federal court docket in Washington, D.C. since the start of 2018.” Fourteen were added to the docket just before the “60-day pause” that Mueller was speculated to be undertaking in advance of the midterm elections.

An unusually high number of sealed criminal indictments have been added to the federal court docket in Washington, D.C. since the start of 2018. Why some wonder if they could be from Robert Mueller: https://t.co/GzRJ0vsuTa pic.twitter.com/nCCux638Ga

Was Mueller locking in his next wave of arrests before Trump purged the DOJ’s leadership?

As per his custom, the Special Counsel isn’t saying. But a general sense that something is about to break has pervaded the Trump inner circle, with several Trump associates out and out claiming they’re about to be indicted, and a typo in a court filing revealing the existence of secret charges against Wikileaks founder Julian Assange—though it’s not known if those charges are related to Mueller’s investigation.

Ironically, the “63,000 sealed indictments” number that QAnon believers tout would include all of these new filings on the D.C. circuit—meaning they’re essentially lumping Trump’s on confidantes in with the rest of the deep state that’s about to be taken down.

That’s the theory that cropped up at almost exactly the same time as ABC News reported on the presence of several dozen sealed indictments on the D.C. court possibly filed by Mueller.

Those indictments, Q believers claimed, had been “partially unsealed”  and made up hundreds of indictments alleging everything from illegal arms dealing to sexual exploitation of children. But these are not the QAnon sealed indictments.

The claim broke on rabid pro-Trump subreddit r/The_Donald and quickly went viral among people predisposed to believe such claims. And to them, it was proof that the complaints of “nothing happening” in the fight against the deep state were wrong.

Here were seemingly dozens of charges being revealed, alleging some of the worst things that a person could do—and filed in no less than Washington, DC.

The proof seemed to be a document from that court unsealing a number of documents from October 2017 until March 2018.

But a closer reading of that document proves that whatever this is (and we don’t know for sure what’s been unsealed), it’s not the first blows in the final storm against the deep state.

The document makes it clear that, like the rest of the “63,000 sealed indictments,” what’s being unsealed are NOT indictments, but requests for surveillance and wiretapping. Essentially, this is court housekeeping, clearing out sealed indictments for evidence gathering that was done over a year ago.

Undue significance was attached to this particular filing simply because October 2017 was around the time that the first Q posts went up, but there’s no indication that any of these dockets are linked to each other, or to any prominent individual. 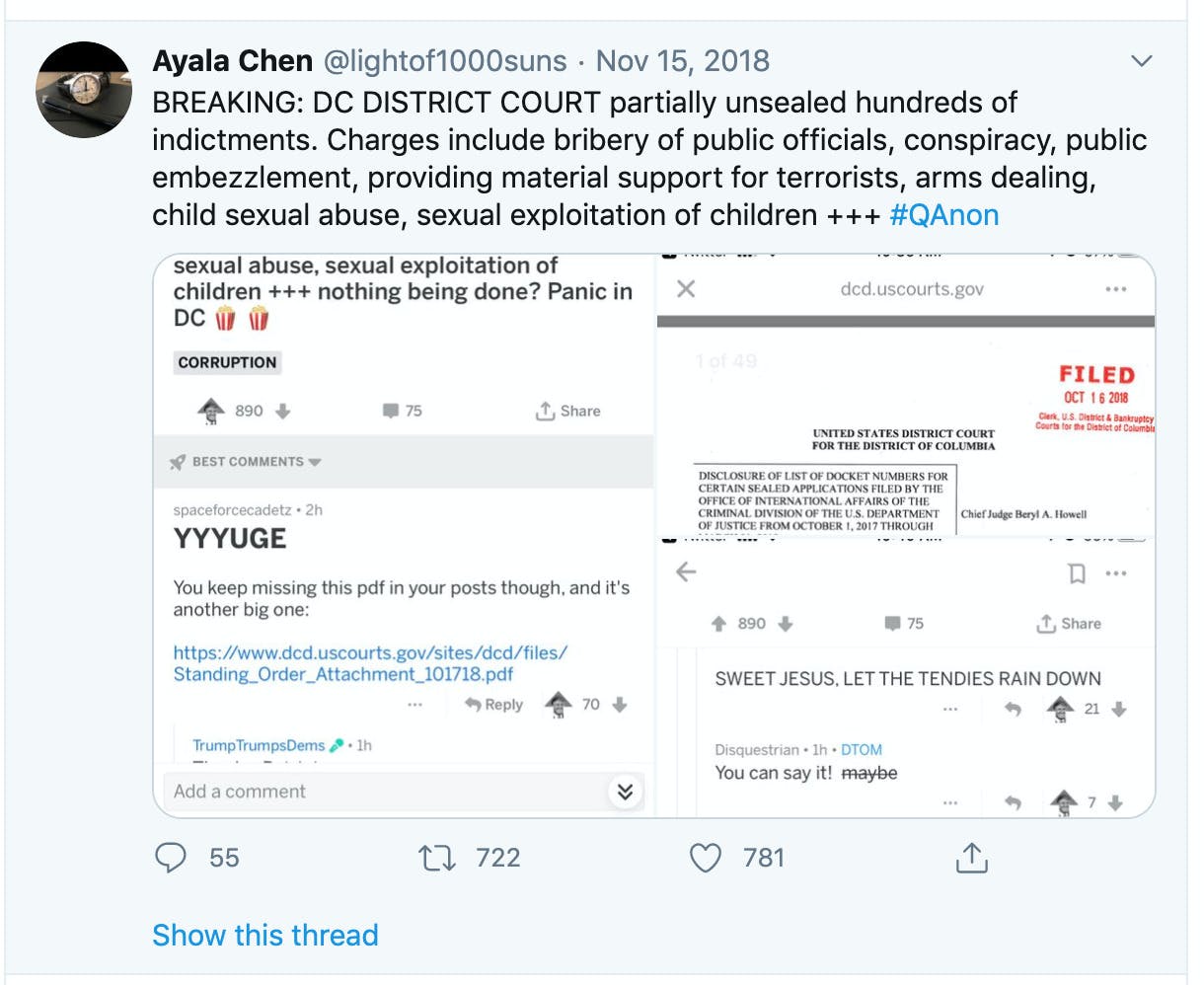 At this writing, only the grand jury who handed down the indictments and the prosecutors who sought them know what’s under seal.

It’s possible that we’ll find out soon. Or maybe we’ll never find out. But it’s a safe bet that they’re not related to the story Q is spinning.

And given the Special Counsel’s talent for secrecy, their subject will likely be a surprise to all.