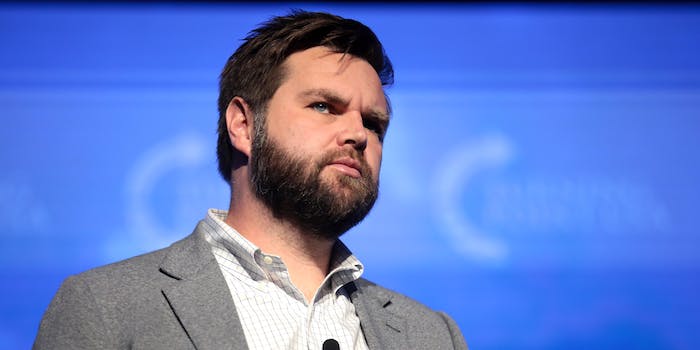 The roasting of JD Vance was excellent.

On Friday, author and potential congressional hopeful J.D. Vance waded into the fight between Republicans and the military. Vance probably should’ve kept his thoughts to himself, because he urged generals not to read books about “white rage.”

That was, as many were quick to point out, a central theme of his memoir, Hillbilly Elegy.

The highly unexpected grudge match between conservatives and the military was sparked by an exchange earlier this week between Rep. Matt Gaetz (R-Fla.) and the chairman of the Joint Chiefs of Staff, General Mark Milley, about critical race theory, the right’s new favorite ideological enemy.

Gaetz attempted to criticize the military for being woke, another favorite target of conservatives, and was, to most observers, thoroughly schooled. “I personally find it offensive that we are accusing the United States military, our general officers, our commissioned, noncommissioned officers of being, quote, ‘woke’ or something else, because we’re studying some theories that are out there,” Milley said.

The exchange became a signal to rally Republicans against Milley in particular and the military generally. Tucker Carlson called Milley a “pig” and “stupid” on his show. Dinesh D’Souza called him a “pompous ass.” Others followed suit.

“I personally would like American generals to read less about ‘white rage’ (whatever that is) and more about ‘not losing wars,’” Vance tweeted.

This was an interesting take coming from Vance. His 2016 memoir was extensively centered on disaffected white people. He’s also written about race relations for National Review and lectured on the same.

“Nobody would even know who you are if not for the book you wrote about ‘white rage,'” Timothy Burke replied to Vance’s tweet. “Did you somehow forgetting writing it?”

“Is there any irony left in the world after this?” wondered one Twitter user.

Many used the opportunity to criticize Hillbilly Elegy.

Vance’s sincerity was also questioned. Some felt that the Ohioan venture capitalist, who once correlated daylight savings to fertility, was merely trying to stoke rage among his potential constituents in the hopes of ginning up support for his campaign as he considers running for Senate.

Vance placed a distant fifth in a recent poll for the Republican primary in the race for Sen. Josh Mandel’s (R-Ohio) seat.