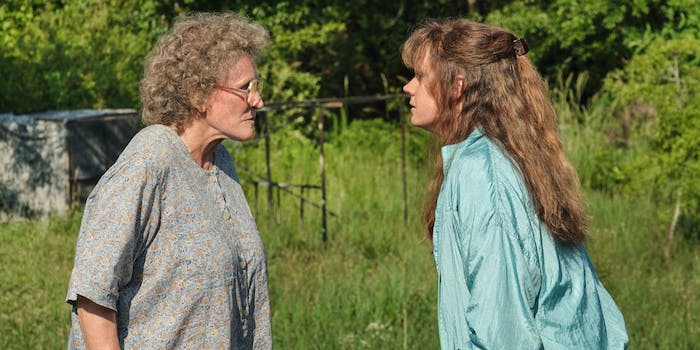 Film Twitter cant't stop talking about how bad the movie is.

It’s usually frowned upon to judge a film by its trailer, but in the case of Hillbilly Elegy, J.D. Vance’s controversial memoir about his poor, working-class family and his rise to become an Ivy League–educated pundit, it was very hard for some people not to. Based on the trailer alone, the film looked and felt like a caricature of Appalachian America—especially to the people who grew up there—and the over-the-top performances (even in condensed trailer form) from Glenn Close and Amy Adams didn’t help its cause.

But now that the review embargo is up, people can see for themselves what the initial impressions of the film are. And well, critics didn’t hold back.

Currently sitting at 19% on Rotten Tomatoes and 40% on Metacritic, Hillbilly Elegy is getting panned left and right. In her two-star review, the Daily Dot’s Gavia Baker-Whitelaw noted that Hillbilly Elegy “doesn’t have anything interesting to offer in terms of direction, performance, or artistic vision.”

On Twitter, critics—who were barred from speaking about the film until the embargo lifted—finally spouted what they think.

“Structurally, it’s a mess and on the whole, painfully uninteresting,” Tomris Laffly wrote. “And I say this as someone who’s a sucker for underdog stories. It’s never a good sign when ‘Why should I care?’ is what you ask yourself after a film.” The Independent‘s Clarisse Loughrey described it as “irredeemably bad.”

There were even a few comparisons to the 2020 presidential election and Donald Trump’s attempt to contest the results despite the fact that Joe Biden already won the election.

Although contempt for Hillbilly Elegy as a whole seems to be wide-scale, critics have generally been more complimentary toward Close and Adams’ performances. Close (who’s been nominated for seven acting Oscars and has yet to win) and Adams (who’s been nominated for six acting Oscars and has yet to win) will both probably be in contention during awards season including the Academy Awards, and Hillbilly Elegy—which deglamorizes both actresses—has “Oscar bait” written all over it. The question is, is there the momentum for one or both of those actresses to finally get their Oscar? Or has the Academy stopped falling for that ploy?

Despite the evisceration that Hillbilly Elegy is getting on Twitter right now, Netflix and Hillbilly Elegy will both be just fine. It will debut on Netflix the week of Thanksgiving, a prime time for many families who’ve gathered together for the holidays who need something to safely watch as COVID-19 cases spike. Vance’s memoir was wildly successful, so you have book fans who are looking forward to the film. Some viewers don’t read reviews before watching a film, are curious about it because of the reviews, or might think that all of the film critics who hate Hillbilly Elegy are a bunch of coastal elites. Also, real life isn’t Twitter, so a lot of potential viewers probably don’t even know about the review embargo.

And chances are, no matter what the critical reaction of Hillbilly Elegy is or what the discourse surrounding the movie shapes to be during awards seasons—and given, at the very least, Vance’s recent dog whistle to white nationalism, it’s not going to be pleasant—Hillbilly Elegy could very well be a film that’s right up the Academy’s alley.