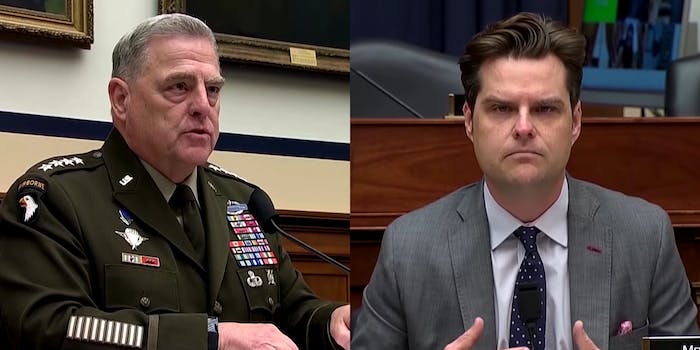 'I want to understand white rage, and I'm white.'

A viral video shows embattled Rep. Matt Gaetz (R-Fla.) getting “schooled” by the U.S. chairman of the Joint Chiefs of Staff on the importance of critical race theory.

Gen. Mark Milley’s remarks provided a public upvote by a major American institution in the application of the evolving, roughly 40-year-old set of concepts.

Gaetz initially asked Defense Secretary Lloyd Austin about the topic during a House Armed Services Committee hearing. Per military news outlet Defense One, the Florida congressman sought to attack the Defense Department’s addressing of “racism and white extremism in the ranks.”

During the hearing, the Florida congressman made a habit of interrupting Austin, saying that Austin’s “stand-down regarding extremism did not help our military, it hurt the military.” He used the firing of Lt. Col. Matthew Lohmeier, who alleged critical race theorists were unduly influencing the military, as a touchpoint.

After Rep. Chrissy Houlahan (D-Penn.), an Air Force veteran and engineer, yielded some of her time to Milley, he directly challenged Gaetz’s questioning: “I do think it’s important to be open-minded and by widely read.”

He continued: “It’s important that we understand that because our soldiers, sailors, airmen, Marines, and guardians, they come from the American people. So it is important that the leaders now in the future, do understand it. I’ve read Mao Zedong. I’ve read Karl Marx, I’ve read Lenin, that doesn’t make me a communist. So what is wrong with understanding, having some situational understanding about the country for which we are here to defend?”

In his impassioned speech, Milley briefly discussed the foundation of CRT through critical legal studies and the creation of asymmetrical discrimination.

According to Defense One, “Among lawmakers’ objections was a recent seminar on ‘Understanding Whiteness and White Rage,’ held at the U.S. Military Academy at West Point, in New York, on whether it was a “woke” effort to inspire race-based guilt among the academy’s majority white student body, or, as the military’s top leaders suggested Wednesday, an important part of higher education to expose the nation’s future uniformed leaders to all points of view.”

Austin, though, believed Gaetz’s unfounded contentions to be “spurious.”

A video featuring Milley’s remarks went viral, with many claiming Gaetz was “schooled” by Milley.