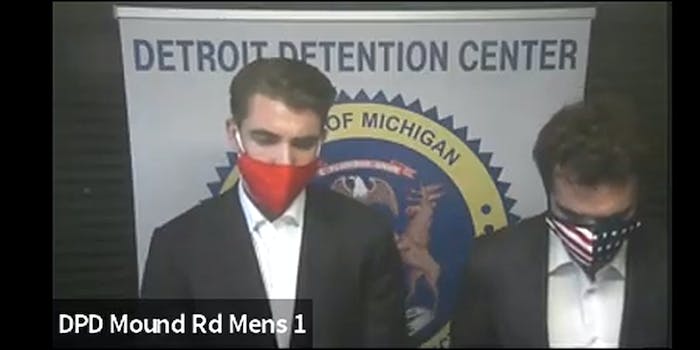 Whol and Burkman's attorney's used the argument in a recent court filing.

Blundering right-wing activists Jacob Wohl and Jack Burkman, mired in an ongoing New York City civil lawsuit against them, filed documents claiming their racist robocall scheme was not illegal and was protected speech which fell under the umbrella of “rhetorical hyperbole.”

That legal argument of “rhetorical hyperbole” is the same argument that conspiracy theorist and Infowars host Alex Jones presented in court in 2019 following his remarks on the Sandy Hook massacre, which Jones billed as a hoax.

As for Burkman and Wohl’s case, they make the same claim that their robocall scheme—which targeted Black communities—is protected speech that didn’t result in “any compensable injury.”

“The First Amendment protects rhetorical hyperbole on matters of public controversy,” the duo’s lawyers David M. Schwartz and Randy E. Kleinman argued in a December 2nd filing. “Speakers who engage in protected expression on matters of public controversy often use vigorous language and rhetorical hyperbole to make their point.”

“The realm of public debate is full of caustic rhetorical hyperbole,” the filling added.

Yet, what Burkman and Wohl partook in was a cross-state campaign to discourage communities of color from voting in the 2020 election via robocalls.

“We should send it to black neighborhoods in Milwaukee, Detroit, Philadelphia, Charlotte, Richmond, Atlanta, and Cleveland,” Wohl emailed Burkman while designing their plan.

This is the latest in a string of mishaps in court from Wohl and Burkman that range from the duo representing themselves, to one of their lawyers claiming he wants Alan Dershowitz to be a witness in their criminal case in Michigan.

Wohl and Burkman, who were once eager to speak to the press, did not respond to requests for comment from the Daily Dot for this story.