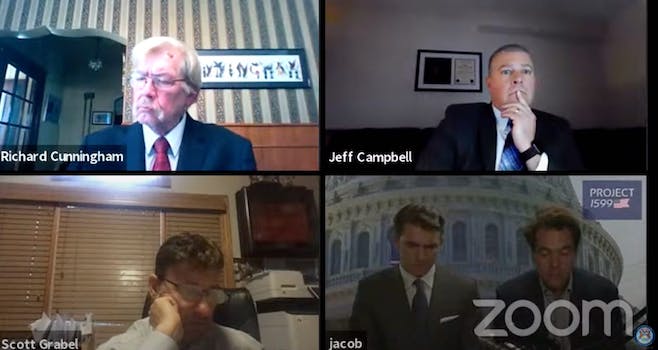 The evidence is pretty blatant.

On Thursday afternoon, right-wing hoaxers Jacob Wohl and Jack Burkman were back in court—which didn’t go as well as they might have hoped.

In the hearing, attorneys for the state of Michigan read through emails which showed the duo directing the targeting of their racist robocalls at Black voters in major cities.

The duo now faces felony charges over their robocall scheme in both Michigan and Ohio, which could land them in prison for decades in either state.

In emails obtained by Michigan prosecutors, it becomes clear how Burkman and Wohl went about their blatantly racist plan to intimidate voters.

“Our press conferences literally get 50-100x more views which is why we must HIJACK this boring election,” Wohl penned to Burkman, on Aug. 19, gloating about their driveway press conferences.

Then Burkman replied, “America needs w b.” [“w b” is shorthand for Wohl and Burkman.]

Burkman shortly after contacted a California-based communications company about conducting the robocall scheme.

Wohl then tells Burkman who to target with the robocalls that discouraged voters in minority communities.

“We should send it to black neighborhoods in Milwaukee, Detroit, Philadelphia, Charlotte, Richmond, Atlanta and Cleveland,” Wohl emailed, on Aug. 25.

Burkman then paid the robocall company, Message Communications, $1,000 with a check in his name. The disgraced D.C. lobbyist further directed the robocall to be sent out with a number associated with him, to which in emails he claims he received “angry black call backs,” to his delight.

Both Burkman and Wohl didn’t respond to multiple Daily Dot requests for comment on their emails being shown in court.

As the Daily Dot previously reported, the duo has a challenging legal battle ahead of them in Ohio and Michigan, along with an ongoing civil suit in New York. Notably, the duo admitted in civil court that they were behind the robocalls.