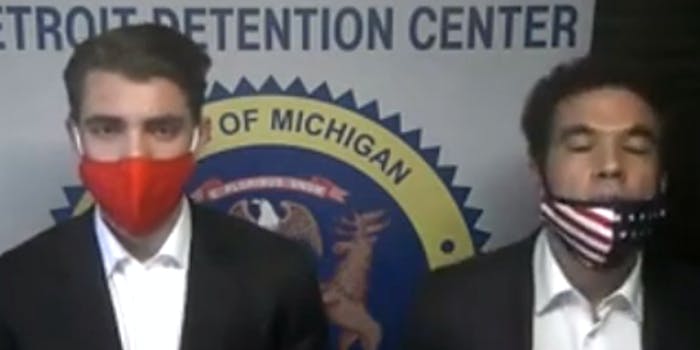 This may not have been the best strategy.

Blundering right-wing activists Jack Burkman and Jacob Wohl appeared before the U.S. District Court for the Southern District of New York on Monday morning over a newly filed civil lawsuit on behalf of the National Coalition on Black Civic Participation.

The suit alleges the two violated the Ku Klux Klan Act by sending out over 85,000 robocalls discouraging Black communities to vote.

At the hearing, the duo was not represented by counsel and instead personally responded to the judge, Victor Marrero, while frequently struggling to address simple questions about their robocall scheme.

Notably, on Friday afternoon, Wohl texted the Daily Dot and informed this reporter he would be represented by a New York City-based lawyer. (That lawyer, David Schwartz, did not respond to multiple requests for comment from the Daily Dot.)

In court this morning, which the Daily Dot was present for, the duo further claimed that Schwartz would represent them. But at the time of the hearing, no counsel was present.

The plaintiff’s legal team began the proceeding by slamming Wohl and Burkman over their scheme.

“Defendants have a long history of perpetrating fraudulent schemes, and their fraudulent schemes are disjoined to disrupt elections … you read the examples, your honor, over the last couple years, they have encouraged or paid multiple individuals to falsely alleged sexual assault against various different public officials, just a few months ago they went on Craigslist to hire actors to play FBI agents to stage a raid on Mr. Burkman’s home and then alleged the government is retaliating against them,” Navarro stated.

“The defendants are fraudsters, your honor,” Navarro added.

Wohl and Burkman are also facing felony charges in Michigan for the robocall and are out on $100,000 bail each

Navarro added that Michigan’s bail could change and don’t go far enough. “There is no reason to believe that the defendants wouldn’t continue to engage in their efforts to intimidate voters,” Navarro stated.

Wohl and Burkman step up to defend themselves.

Burkman declared the two would not be partaking in robocalls between now and the election and stated he believes his bail set by the Michigan court is “unconstitutional.”

The judge then asked Burkman, “whether you or acting alone or with anyone else prepared that message and caused it to be sent?”

Burkman had previously denied he was behind the calls in a statement to the Daily Dot when they were first revealed.

The judge then asked whether Burkman has in his possession the list of all who were contacted by the robocall, to which Burkman stated, “I do not, in my possession.”

Burkman then admitted to giving the third-party California company which sent out the robocall the green light.

Navarro completed the hearing by shutting down Wohl’s objection that the call never said to “stay home.”

She read the transcript back to the court, where the last line of the call is, “don’t be finessed into giving your private information to the man, stay home” and the hearing was closed.

Following the hearing, lawyers on Twitter pointed out that the duo representing themselves might not have been a great idea.