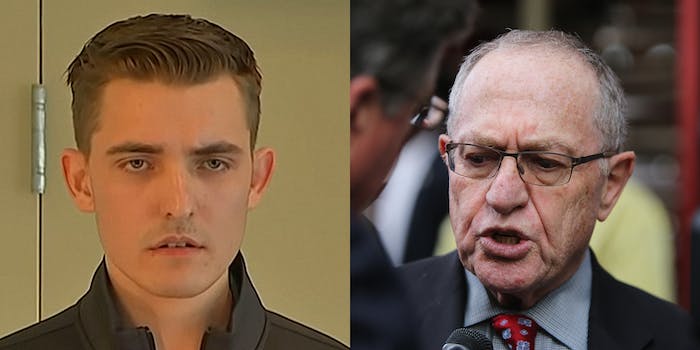 But he's not responding to emails.

Blundering right-wing activists Jacob Wohl and Jack Burkman’s legal counsel Scott Grabel and William Amadeo of Grabel & Associates stated in court on Monday morning that they are attempting to have pro-Trump lawyer Alan Dershowitz serve as an expert in “constitutional law” on their behalf.

“I’ve consulted with him, he’s working for the president right now on this election fraud situation…he teaches at Harvard Law School, that’s who I’ve consulted with, Alan Dershowitz, but again I have to get him to respond to see if he is going to do it, ” Grabel stated.

Grabel went on to state in the virtual courtroom of the Third Judicial Circuit of Michigan that Dershowitz hasn’t responded to his past two emails.

Michigan Attorney General lawyer Richard Cunningham stated that he had an objection to Burkman and Wohl’s legal team calling an expert attorney to testify on the constitutionality of their own client’s actions.

“An attorney’s role is to argue the law, not to testify as to what the law is,” Cunningham stated.

When contacted by the Daily Dot via phone on Monday morning, Grabel said he had no further comment on the Dershowitz matter, before stating that Dershowitz hasn’t yet been retained by them, but was reviewing materials sent to him on the case.

Dershowitz couldn’t be reached for comment by the Daily Dot immediately.

Burkman and Wohl face felony charges in Michigan stemming from their racist robocall scheme, which targeted Black communities and discouraged people from voting in the 2020 election.

Dershowitz, for his own part, is under fire for his role in the Jeffrey Epstein pedophile ring, an accusation he thoroughly denies.

Update 1:12pm CT: Following publication of this story, Law&Crime reported that Dershowitz’s denied the claims made by Burkman and Wohl’s legal team that he was ever involved in the duo’s felony case or working on behalf of Trump’s election fraud lawsuits.