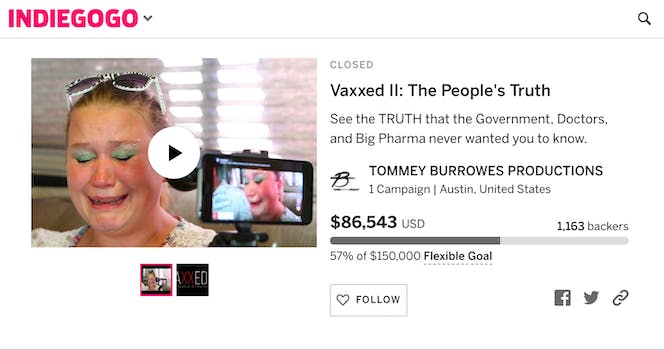 The move comes after money was raised for an anti-vaxxer documentary.

Crowdfunding site Indiegogo is trying to do its part to limit one of 2019’s biggest threats to global health: vaccine hesitancy. The site announced Friday that it will no longer host anti-vaccination fundraisers, according to BuzzFeed News.

Polly Tommey and Brian Burrowes recently raised $86,543 on Indiegogo to make an anti-vax documentary called Vaxxed II: The People’s Truth–which is set to double down on the already-debunked claim that vaccines cause autism.

An Indiegogo spokesperson told BuzzFeed News that the filmmakers will get to keep the money raised, but they are now looking into ways to ban future anti-vaccine projects from their site.

“See the TRUTH that the Government, Doctors, and Big Pharma never wanted you to know,” the Vaxxed II Indiegogo page reads (the page is still up as of this writing, but fundraising is closed). Vaxxed II is a follow-up to Vaxxed: From Cover Up to Catastrophe, which was removed from Amazon Prime streaming in March.

Indiegogo’s new policy is set to ban any health-related fundraisers that do not have scientific backing; since anti-vaccine content is not based on science, it will be banned from the site.

GoFundMe made a similar move last month by banning anti-vaccination fundraisers. Facebook, YouTube, Amazon, and Pinterest are all also trying to limit the amount of vaccine misinformation that gets spread on their respective platforms.

The World Health Organization (WHO) listed vaccine hesitancy as one of its ten threats to global health in 2019. 2018 was one of the worst years for measles cases since the disease was eradicated in the U.S. in 2000, according to the Centers for Disease Control and Prevention. And 2019 is already a record-breaking year for measles cases.

The rise in the anti-vaccination movement is directly correlated with the rise in measles cases. So, every time a series of measles outbreaks takes place in the U.S., people look to anti-vaxxers as the ones to blame.

The measles is a viral infection, with symptoms including a fever and skin rash, which can prove deadly–especially for young children and babies who are too young to get immunized.

One of the main reasons people are hesitant to have their children vaccinated is because of the belief that vaccines cause autism. The theory, which was developed by a physician, has been pervasively debunked, and that physician’s license was revoked.

Much of the misinformation anti-vaxxers get comes from the internet and through documentaries.

The Daily Dot has reached out to Indiegogo for comment but did not receive a response by press time.