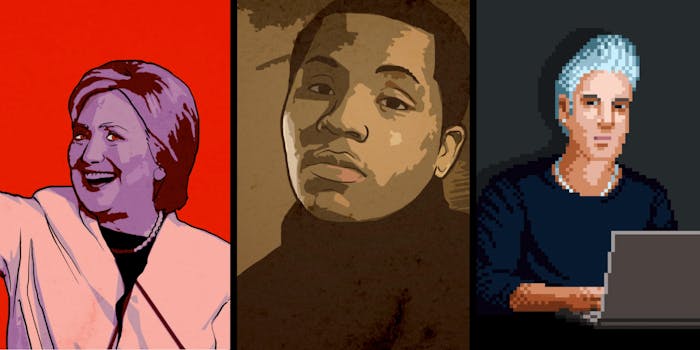 Explaining the alt-right, Guccifer sentenced to jail time, The politics of ‘Hillary For Prison’: ICYMI

Here's all the news you might have missed for Thursday, Sept. 1.

Here’s some of the news you may have missed:

What do we angrily scream about when we angrily scream “lock her up” at the top of our lungs whenever Donald Trump says the words “Crooked Hillary?” Calls to send Hillary Clinton to prison are nothing new. Some conservatives have advocating fitting Clinton for a black-and-white-striped pantsuit since her days as first lady. However, the Trump campaign recently began selling official merchandise advocating for the imprisonment of his general election rival, which is something fundamentally new in terms of American presidential politics. “If the art of politics is compromise, which I do believe, once you demonize your opponent to the point where they’re not worthy [of freedom], then the political process itself suffers no matter who wins,” former official historian for the U.S. House of Representatives Ray Smock told Layer 8’s Aaron Sankin. “Then you can’t govern.”

The man the world has to thank for the Hillary Clinton email scandal, a Romanian hacker best known by the handle Guccifer, was sentenced to 52 months in federal prison for a bevvy of computer crimes. Marcel Lehel Lazar, was arrested in 2014 after a series of hacks against prominent U.S. political figures. After hacking the sister of former President George W. Bush, Guccifer leaked a number of Bush’s paintings online, and they were weirdly charming in a way that made us, as a nation, a little uncomfortable. However, his most enduring contribution to U.S. political discourse was a hack compromising the email account of longtime Clinton adviser Sidney Blumenthal, who appeared to have exchanges with the former Secretary of State using an email address nobody seemed to recognize.

Got any sick burns in your back pocket today Uncle Joe?

"[Trump] was born with a silver spoon in his mouth that he's now choking on because his foot's in his mouth along with the spoon." -VP Biden

How alternative is the alt-right? Well, think of it as the Trump-era Nirvana to the George W. Bush-era neoconservative Guns N’ Roses—except with more racist memes and pretty much the same amount of bored, suburban angst. As the Daily Dot’ s Amrita Khalid wrote in an Alt-Right 101 explainer, the movement, which Clinton blasted in a recent speech, congregates in online forums like Reddit and 4chan. Rising to a new prominence with the ascendancy of Trump to the forefront of the Republican party, the alt-right is largely built around the belief that “white identity” is under attack from multiculturalism and political correctness. A spokesperson from the Southern Poverty Law Center, which has branded the alt-right as a hate group, said the movement is “a re-branding of white supremacy for the digital generation.”

Speaking of which, one might think a neo-Nazi intentionally running over an African-American teenager outside of a Portland, Oregon 7-Eleven would be universally denounced. As IRL reporter Mary O’Hara reveals, members of some white supremacist groups posted Facebook messages supporting the alleged murderer. “They tested kindred and homeboy did not hesitate,” read one message.

“Whistleblowing is when someone reveals an act of official wrongdoing, and because it is official wrongdoing, we assume that it’s in the public interest to know about this and hold the culprits accountable,” charged a senior State Department official in a 2010 email to then-Secretary of State Hillary Clinton. “Instead what WL is exposing, by and large, is a vast number of official acts of rightdoing—diplomats engaged often with partners from other governments or civil society, in solving the kind of practical problems that arise in a world made up of nearly two hundred nations.”

The email—which was sent in the wake of the radical transparency organization’s release of the hundreds of thousands leaked by Private Chelsea Manning—shows how at least one government official wanted to discredit Wikileaks’s approach.

We just want someone to love us as much as Glenn Greenwald hates the New York Times.

If DNC emails had been sent to NYT instead of WL, would they have reported them, or suppressed them to avoid helping Russia?

Nearly two centuries ago, the Jesuits who ran Georgetown University sold 272 slaves. Today, feeling more than a little bit guilty about all of this, the school’s leadership is making amends by, as IRL Lyz Lenz reports, “offering preferential admission to the descendants of slaves … and planning on issuing a formal apology to ‘create an institute for the study of slavery and erect a public memorial to the slaves whose labor benefited the institution.’”

Since this basically amounts to direct reparations for slavery, the move drew no controversy whatsoever on social media from people on either side of the issue. Everyone was super chill about the whole thing. Just super duper chill.

Gender-bending rapper Young Thug is about to explode, which is why the cover of his **fire emoji** new mixtape, showing the 25-year old Atlanta native in an ultra-stylish dress, is drawing outsized attention. The Daily Dot’s Chris Osterndorf breaks it down: “Naturally, when the internet got its first glance at the artwork, people had a lot of questions. What was Young Thug trying to say? How would hip-hop fandom react? Would the decision hurt or help his career? The one thing we know for sure is that no other rapper in his position would make the same decisions—which, as it happens, is exactly what makes Thug’s wardrobe choice so important.”

A rocket launch by SpaceX this morning ended in a massive explosion.

This Doctor Who cookbook: Quality doesn’t matter. You’ll buy literally anything with a picture of the TARDIS on it because you are a predictable nerd with no self control.

It is with a heavy heart, that we must inform you the Clinton Foundation is at it again with the skirting of ethical lines that, while not breaking the law, are certainly unseemly. —via Kenneth Vogel, Politico

Here is a new Nick Cave song. It belongs in your ears.