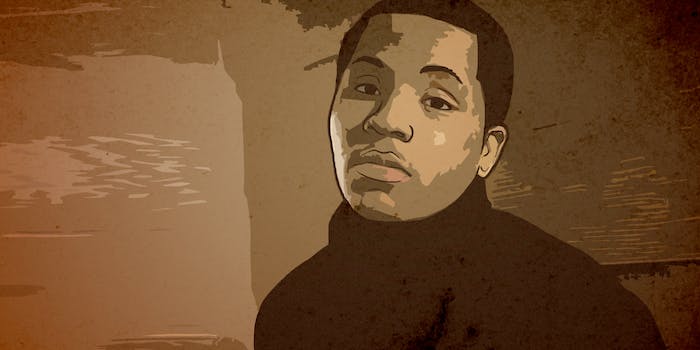 One white supremacist wrote on Facebook: 'They tested kindred and homeboy did not hesitate.'

A black teenager in a Portland, Oregon, suburb was killed by a white supremacist gang member in what police say was an intentional hit-and-run.

Larnell Bruce, 19, had just recently moved to Gresham to live with family when he encountered a notoriously violent neo-Nazi named Russell Courtier outside of a 7-Eleven on August 10. The 38-year-old Courtier had spent time in prison, where he belonged to the European Kindred—a white supremacist gang that was founded in Malheur County, just a few miles from where a conservative white militia staged an armed takeover of a wildlife refuge this January.

As the Portland Mercury reported Wednesday, a fight broke out between the gang member and the teen—with Courtier smashing Bruce’s head into the glass storefront of the 7-Eleven. The clerk called police, and Bruce ran. But Courtier and his girlfriend, 35-year-old Colleen Hunt, got in their Jeep and chased Bruce across sidewalks and oncoming traffic in the vehicle. Finally, they mowed him down, leaving police to find the teen “in the middle of the street with blood rushing from his head and ears.”

Bruce died in the hospital a few days after police found him mangled by the hit-and-run.

After Courtier was arrested for the murder, the Mercury reported that several local white supremacists and members of the European Kindred (EK) gang were posting messages of support for Courtier on Facebook.

“They tested kindred and homeboy did not hesitate,” wrote one alleged EK member.

The Daily Dot searched through known white supremacist forums on Stormfront, Daily Stormer, and 4chan/pol, but did not find any new threads about Courtier’s arrest.

The Mercury revealed that Courtier had a long and violent record of which law enforcement authorities were fully aware. At the time he killed Bruce, Courtier was still on parole for attacking a woman with a knife. His record includes seven felony and four misdemeanor convictions, over 40 prison violations during time served, and a series of incidents in which Courtier was given probation or dropped charges—even after police found him shooting a gun out of his car window in 2011, or bashing his fiancé’s head into a car windshield in 2012.

On Thursday, after the New York Daily News‘ Shaun King wrote about the killing, black Twitter users and anti-racism advocates posted distressed and saddened messages. Many of the tweets compared the lack of media attention on the murder to the exorbitant amount of press devoted to NFL quarterback Colin Kaepernick’s decision to sit during national anthems at games—a quiet protest that has caused angry fans to burn their 49ers jerseys.

Just spoke with the mother of Larnell Bruce. He was run over by a car on E. Burnside in Gresham, he later died. pic.twitter.com/uKazWW8X8C

Local Portland news station KPTV interviewed Bruce’s family just after his death in the hospital. A family friend told the station that Bruce was “a good kid” who “had a hard life.”

“I hurt inside and I’m just wanting closure,” the teen’s mother, Christina Mines, told KPTV. “I miss him so much.”

Update, Sept. 1, 1:50pm: A GoFundMe page has been set up to pay for Bruce’s funeral and medical expenses.