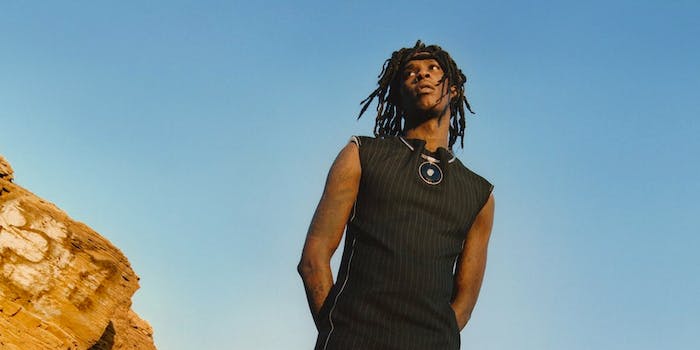 For rap fans who spend any amount of time online, he’s become impossible to ignore.

Young Thug may not be a household name, but for rap fans who spend any amount of time on the internet, he’s become impossible to ignore.

The 25-year-old Atlanta native, born Jeffery Williams, remains unclassifiable despite the industry’s best attempts to find a natural spot for him.

Thugger first came to prominence under another internet rap sensation, the cult hero Gucci Mane. The two collaborated while he was still a part of Gucci’s 1017 Brick Squad imprint, and although they’re no longer labelmates, they continue to be friends today. After Brick Squad, Thug moved to Cash Money offshoot Rich Gang, following in the footsteps of his idol, Lil Wayne. For a time he was managed by Wayne’s former mentor Birdman, and it was under Birdman’s tutelage that Thug found his most apparent peer in the rap game, Rich Homie Quan, another gargle-voiced trap star from the ATL. Thug and Quan recorded copious music together, including Thug’s biggest hit to date, “Lifestyle.”

Comparisons to Future (who like Thug and Quan and Gucci also hails from Atlanta) abound whenever Thug comes up, which makes sense given both artists’ prolific tendencies and place in the “mumble rap” subgenre, which Future is the king of. “Both give the very strong initial impression that they are, quite literally, making up their music in real time, and rap listeners who gaze blankly at Thug and Future are usually reacting negatively to that idea: ‘What kind of gibberish is this?’’” writes Pitchfork’s Jason Greene. “[B]oth Future and Thug sneak in lyricism under the cover of unintelligibility, one of hip-hop’s oldest tricks.”

Yet despite intersecting with many other prominent hip-hop artists over the past few years, Thug has always stayed in his own lane. The latest and perhaps strongest evidence of this arrives with his new mixtape, Jeffery, which finds Thugger wearing an ornate purple dress on the cover.

Naturally, when the internet got its first glance at the artwork, people had a lot of questions. What was Young Thug trying to say? How would hip-hop fandom react? Would the decision hurt or help his career? The one thing we know for sure is that no other rapper in his position would make the same decisions—which, as it happens, is exactly what makes Thug’s wardrobe choice so important.

There are certainly gay rappers. Artists like Mykki Blanco and Leif are not so much playing with hip-hop’s traditional notions of masculinity and homosexuality as they are taking a sledgehammer to them. What makes Young Thug interesting is the way he exists within the world of mainstream hip-hop and stands apart from it simultaneously.

No other popular rap act in recent memory, save possibly for Odd Future, has proven to be such a mass of contradictions.

Thugger is a guy who idolizes Lil Wayne and has gotten co-signs from Birdman, T.I., and Gucci. A quick scan of his most popular songs reveals that he talks about what are considered typical hip-hop topics—money, women, weed—as much as any other popular rapper. He’s been involved in traditional rap beefs, including ones that, unfortunately, have erupted in violence. His very moniker is meant to conjure a specific image: There are plenty of rappers who use the word “young” in their name, regardless of age, but the word “thug” brilliantly invites and rebukes the national conversation surrounding how we think and talk about young black men.

Meanwhile Young Thug has also literally said things like, “I feel like there’s no such thing as gender.” He refers to his male friends with terms of endearment such as “bae,” and “lover,” and “hubby.” In regards to sexuality he’s been coy, though his opinions seem to be far from what we traditionally think of as masculine. Case in point, in a recent interview with his fiancée he said that he really doesn’t like having sex all that much, period. And as far as his wardrobe is concerned, let’s not forget that Jeffery is far from the first time he’s worn a dress.

This struggle to identify who’s the real Young Thug, to reconcile one part of his personality with the other, has been happening alongside a similar struggle over the soul of hip-hop. Everything from the advent of skinny jeans to Kanye West wearing a kilt has heralded rap’s increased flirtation with the flamboyant. This shift in hip-hop goes beyond fashion though. It’s hard to imagine a performer like Frank Ocean being so (mostly) accepted as recently as a decade ago.

On the other side of the spectrum, hip-hop “alpha conservatives” like Lord Jamar and Ice-T have bemoaned the direction their beloved genre, and to a greater extent, the country they live in, is headed. Young artists like Waka Flocka Flame and Chris Brown have been openly transphobic. Eminem has continued to use misogynistic and homophobic lyrics, despite getting older. And while most artists asked about it were game, not everyone was such a big fan of Thug’s Jeffery look.

Let’s acknowledge there may be a legitimate reason some are uncomfortable with that last point. The history of black men in drag is, to say the least, complicated. As Mikelle Street of Complex notes: “Some viewed Thug’s act as the latest in the stream of ways society has sought to embarrass, bring down, or ‘sissify’ black men.”

Street’s point is that the gut reaction, especially for a black person, of seeing Young Thug in a dress may be a conflicted one. But he also acknowledges that the issue isn’t what it used to be. “Increasingly… black men are widening the ideas of what black masculinity is,” Street warrants.

Global Grind takes a slightly more hardline approach on the issue, declaring that: “Dave Chappelle took an important stand against Comedy Central when they tried to metaphorically ‘put him in a dress.’ But his stand wasn’t the same as the paranoid misogyny buried in questions about Young Thug’s sexuality.”

One of the biggest endorsements of Thug’s Jeffery look came from the legendary Erykah Badu, who compared it to the style of her former partner and Outkast member André 3000. Thug and 3000 aren’t the only ones who come to mind when discussing hip-hop and gender-bending either. Lil B, the original internet rapper, wore a women’s blouse, hat, and earrings on ESPN. Of course, this is the same Lil B who once named his album I’m Gay, later adding the subtitle “(I’m Happy),” all of which shows that it can be hard to determine when Lil B is sincere versus when he’s just trolling. (For the record, Lil B is not gay, and even when he’s trolling he seems pretty sincere.)

Young Thug’s more appropriate comparisons may lie outside the world of hip-hop. Justin Charity of the Ringer recently likened him to James Brown. And let’s not forget that the late David Bowie always kept ‘em guessing when it came to sexuality and gender.

One artist in particular laid the groundwork for Thug’s bold experiments in style—the other legendary rock star to pass away this year. Prince was a straight black man and a sex symbol and he never let anyone tell him how to dress or talk or act. His wardrobe was often feminine, and people questioned his sexuality from the moment he first appeared, but he didn’t let these questions detract from his masculinity or his blackness. Heck, Prince even predicted Young Thug’s flirtation with name changes.

Like Prince before him, Young Thug doesn’t care what you think. Read any sampling of comments about him in any given article on the internet, and you’ll find multiple voices telling him to just come out already, or to stop messing up hip-hop with his unconventional style. But Thug isn’t concerned with any voice other than his own, which is precisely what makes him so significant. While we persist in breaking down barriers of gender and sexuality as a country, that means something in hip-hop—and it means something in America.

As Young Thug moves forward, marching to the beat of his own drum, some say his music has advanced too. Some are already calling Jeffery his masterpiece. Consider the (fittingly titled) album highlight “Kanye West.” The song is undecipherable, strange, hauntingly beautiful—it’s the perfect encapsulation of Young Thug himself.