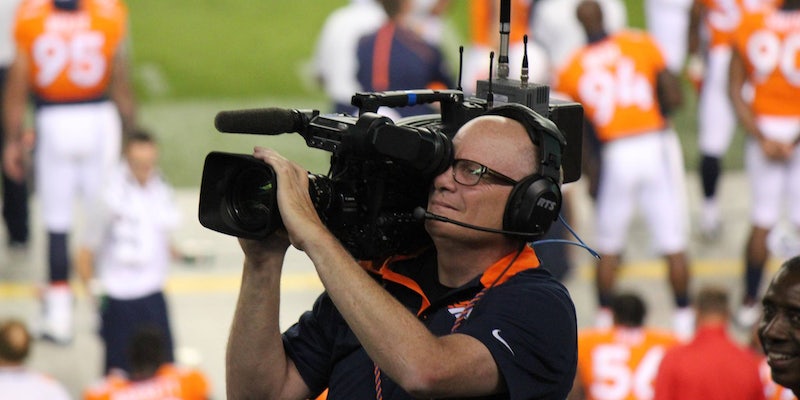 Everything you need to know about watching the NFL on Twitter

Are you ready for some streaming?

Twitter has always been one of the go-to second screen services for any NFL fan. Starting this season, it also becomes the first screen. Twitter is carrying live streams of 10 NFL games over the course of the 2016 season.

Here’s everything you need to know about watching the NFL on Twitter.

Twitter will be spamming the link to the broadcast at every opportunity, as well as making it clear in its Moments tab that you can watch the game on the platform. But just in case you can’t find it, live streams on Twitter will be available here: tnf.twitter.com

You won’t be forced to watch the game on your computer or mobile device, though. Twitter rolled out new set-top box apps that will also carry the broadcasts and make it possible to blow the game up to full-screen. The apps are available for Apple TV, Xbox One, and Amazon Fire TV.

The set-top box apps will also carry broadcasts from other Twitter streaming partners including the NBA, MLB, NHL, and video content from Twitter-owned services video services like Periscope and Vine.

Nope, just head to the live stream on Twitter.com or fire up one of the Twitter apps and you’ll be able to watch whether you’re logged in or not.

Thursday September 15, 2016 marks the first NFL game that will be broadcast on Twitter. All Thursday night games kick off at 8:25pm EST.

Here’s the full schedule for Twitter’s broadcasting slate over the course of the seasons.

Will it be available in my region?

The game will be carried globally—except for Canada, which gets the shaft because the NFL has an agreement with Canadian carriers to broadcast the games on TV only. Also Canadian football is slightly different than American football and they should be punished for it.

Canadian users will be blocked from watching based on location and IP address.

Wait so how does this work, exactly?

Good question! Twitter has been messing around with its streaming platform all summer, broadcasting everything from tennis matches at Wimbledon to the Republican and Democratic convention—all of which went off mostly without a hitch. It even has already streamed a football game, albeit a collegiate contest.

That’s thanks in part to Twitter tapping a service that knows what it’s doing when it comes to streaming. The social network enlisted the help of BAMTech, the streaming tech unit built by Major League Baseball, to make sure everything goes smoothly. It’s the same team behind HBO Now, PlayStation Vue, and the WWE Network.

Twitter will be using BAMTech to stream the network broadcast of the game that appears on TV. Built around that stream will be the type of content you’d expect from Twitter. There will be a live feed of tweets so you can watch commentary from fans, players, and others in real-time as the game happens.

How’s that going to go?

Yep, that seems about right.

Not during the game, no. Play-by-play and color commentary will come from the broadcasting team of the network Twitter carries the stream from—Thursday night games are split between CBS, NBC, and NFL Network.

But Twitter will have its own pre-game, halftime, and post-game commentary happening via its live streaming video app Periscope. Former NFL wide receiver and ESPN broadcaster Chris Carter will be in the booth for Twitter, going live 90 minutes before kickoff to provide analysis, insight, and likely answer some fan questions given that it will take place via Periscope.

Will there be commercials?

Yeah, of course. You think Twitter (reportedly) spent $10 million to secure the streaming rights to these games to not make a couple bucks off of it? Viewers will be shown the same national ads as they’d see on the TV broadcast.

The social media platform will also be serving up ads that it sold in place of the typical local market advertisements—reportedly for between $1 million to $8 million per package. According to a report from the Wall Street Journal, Anheuser-Busch; Verizon; Sony; Ford; and Nestlé have all bought ad spots for the broadcasts.

So basically more of the same ads that you’re already seeing, but targeted to you—one user might see an ad for a Ford Escape SUV while you see a Ford Fusion commercial, for instance.

Probably not, no. Thursday Night Football games have historically been the worst games of the season. Most teams playing come in with less rest than a full week would provide and the result is a sloppy, uneven version of football that often ends in a blowout.

But at least the Color Rush jerseys are cool—even though this year’s uniforms got leaked early and last year’s made the game impossible to watch for color blind viewers.

Despite all that, it’s NFL on a weeknight, and that might be reason enough to put it at the top of your TV priority queue.